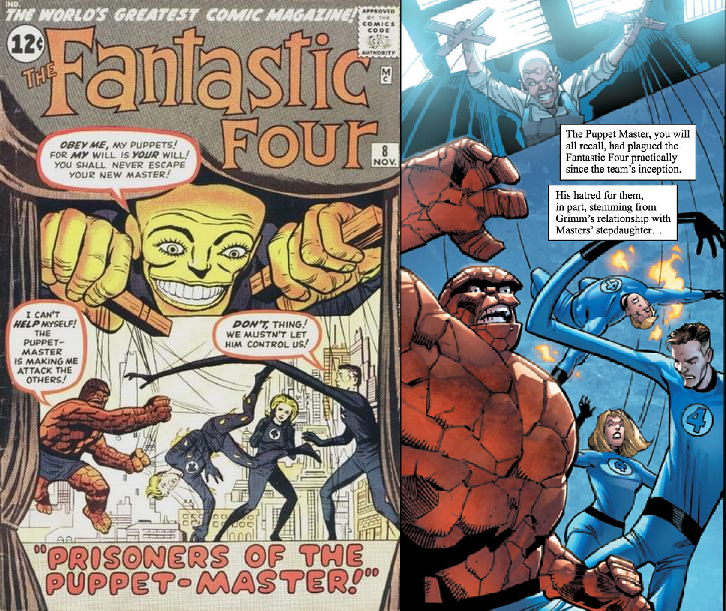 I've come to expect a lot on this series from writer James Robinson, artist Leonard Kirk, colorist Jesus Aburtov, and whatever inker happens to be on the issue at hand (in this case, Scott Hanna). Luckily enough, they keep meeting or surpassing my expectations with each subsequent issue. From that statement, I think you can gather that I quite enjoyed this particular installment.

This book manages to accomplish a great deal within its pages and do it beautifully. This issue has action, heart, intrigue, and manages to advance several plot threads that have been making their way through Robinson and Kirk's run while introducing a major new player and element. With all of that though, nothing feels rush or cramped and this is a perfectly satisfying standalone read for people keeping up with the series. On top of that, Leonard Kirk and the rest of the art team have provided a nearly flawless issue's worth of art.

For anyone who wants to avoid spoilers, I'll just make a quick summing up statement of my opinion on this issue and the series so far right here. As a longtime reader of the Fantastic Four, this run by Robinson and Kirk has become a positive joy for me. Whereas in other arcs of recent memory, I at times found myself dreading subsequent issues, I am chomping at the bit for each new issue in this run. For the first time in a long time, I feel like the entire team is experiencing meaningful development and the reader is being treated to legitimate drama rather than an unsatisfying facsimile thereof or some writer's idea of a clever plot. This issue in particular allows Reed and Sue Richards to have a good chunk of the spotlight and I'm more than a little intrigued by the mystery of all the developments so far, in particular what Ben Grimm has and will be going through. Even Johnny Storm is in a place where I'm looking forward to seeing how he deals with his current predicament. This issue and this series are a must-read for fans of the Fantastic Four, fans of Marvel, and people who just like reading great comics. 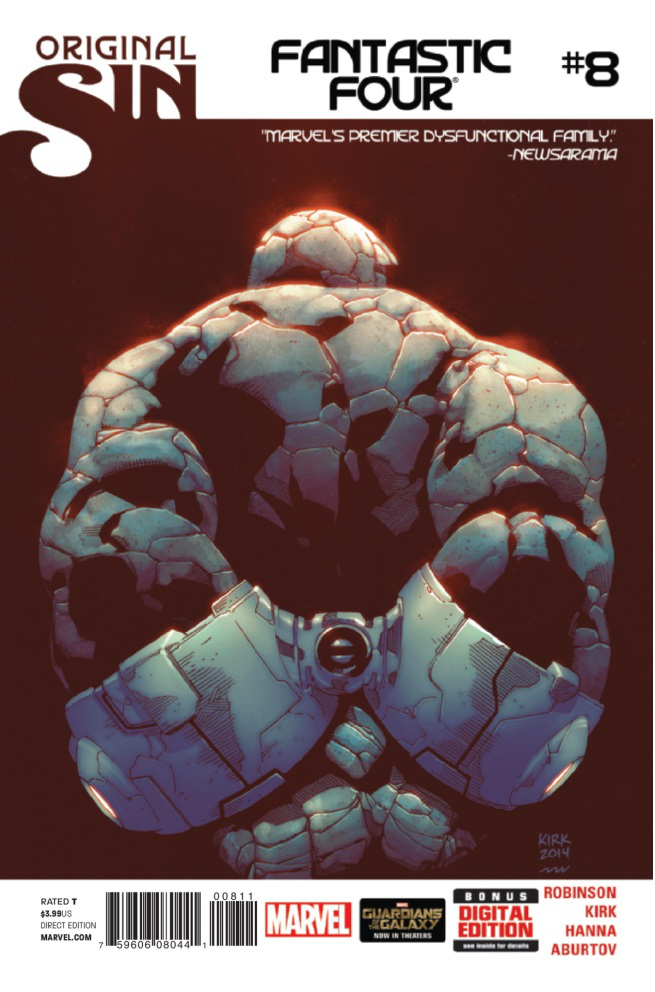 That being said, for a more detailed analysis, let's dive into the breakdown and don't be surprised if you encounter some invisible force… SPOILERS!

Having recently gained a much better appreciation and knowledge of Robinson's style and the storytelling devices that he has employed in the past, it's nice to see a number of them popping up here as many of them help to create an intricate narrative and give the impression that Robinson is putting a great deal of thought and effort into creating a meaningful story with this run. In this issue, Robinson makes use of third person narration in the form of an outside individual's account of the events depicted, makes a number of references to past continuity, and employs some of the fractured timeline that I've seen in his past work in the way that he only now returns to depict Sue's fight with Avengers.

Speaking of that fight, I very much appreciate seeing Sue get a chance to let loose and holding off on showing this for two issues. Teasing it repeatedly through showing its start two issues ago and featuring it on last issue's cover only whet my appetite to see this momentous throw-down and I have to say that I was not disappointed. Of course, no matter how much of the fight he and Kirk depicted, I would have wanted more but seeing her deal with Luke Cage, Iron Man, Thor, Hawkeye, Spider-Woman, and the Hulk was a thrill. I've said it before in past issues but she doesn't get to demonstrate the depth of her power nearly often enough. Kudos to the creative team. 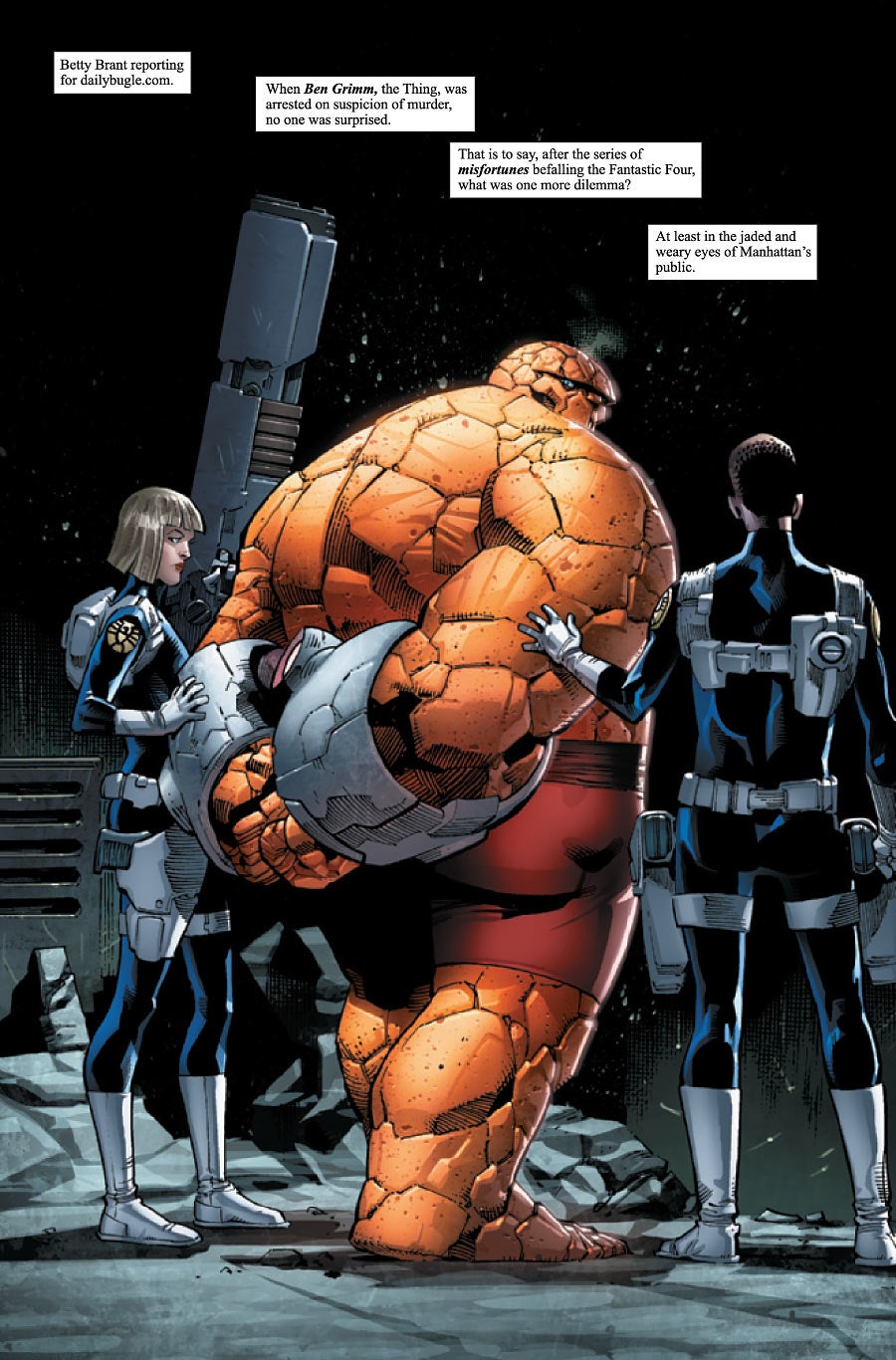 I've already mentioned Robinson's weaving of multiple plot threads but I am legitimately impressed at the way he is juggling them all so expertly. I am legitimately intrigued by everything that is occurring and am invested in every character's outcome. I want Reed to get back into his lab, I want Sue to get her children back, I want Johnny to get his powers again, I want Ben sprung from the joint, and I want to see Dragon Man saved. Realistically, nothing is resolved in this issue, it merely advances all of these plotlines and when that happens I tend to feel unsatisfied with an issue, annoyed that this one nugget of story can't stand on its own. However, perhaps in part because the Sue vs Avengers fight was pushed back to this issue, I'm perfectly content with this comic and wholeheartedly glad to have picked it up.

Further praising Robinson, I have to say that he nails the voices of all the individual characters which helps to sell the story very well. In particular, Reed and Sue's heart-to-heart on a helicopter is particularly heartwarming and one really does feel the love and understanding between these characters. It's also worth noting that the little bit of Thor-speak he provides is enjoyably peppered with old-timey terminology and any time Luke Cage utters a variation on "Sweet Christmas!" it puts a smile on my face.

At the beginning of this series, some were concerned that the Future Foundation kids would be forgotten. By now, Robinson has amply proven that will not be the case and the subplot where they and the Android Human Torch, Jim Hammond, must save Dragon Man promises to be intriguing and will possibly cut to the heart of the larger mystery around the circumstances leading to the Fantastic Four's eviction. It's great to see this subplot continue and for Hammond to be weaved even more thoroughly into the narrative of this arc. Some comments I've seen with respect to this series come from people hoping for a full-on crossover with Robinson's Invaders series and I certainly wouldn't mind that. 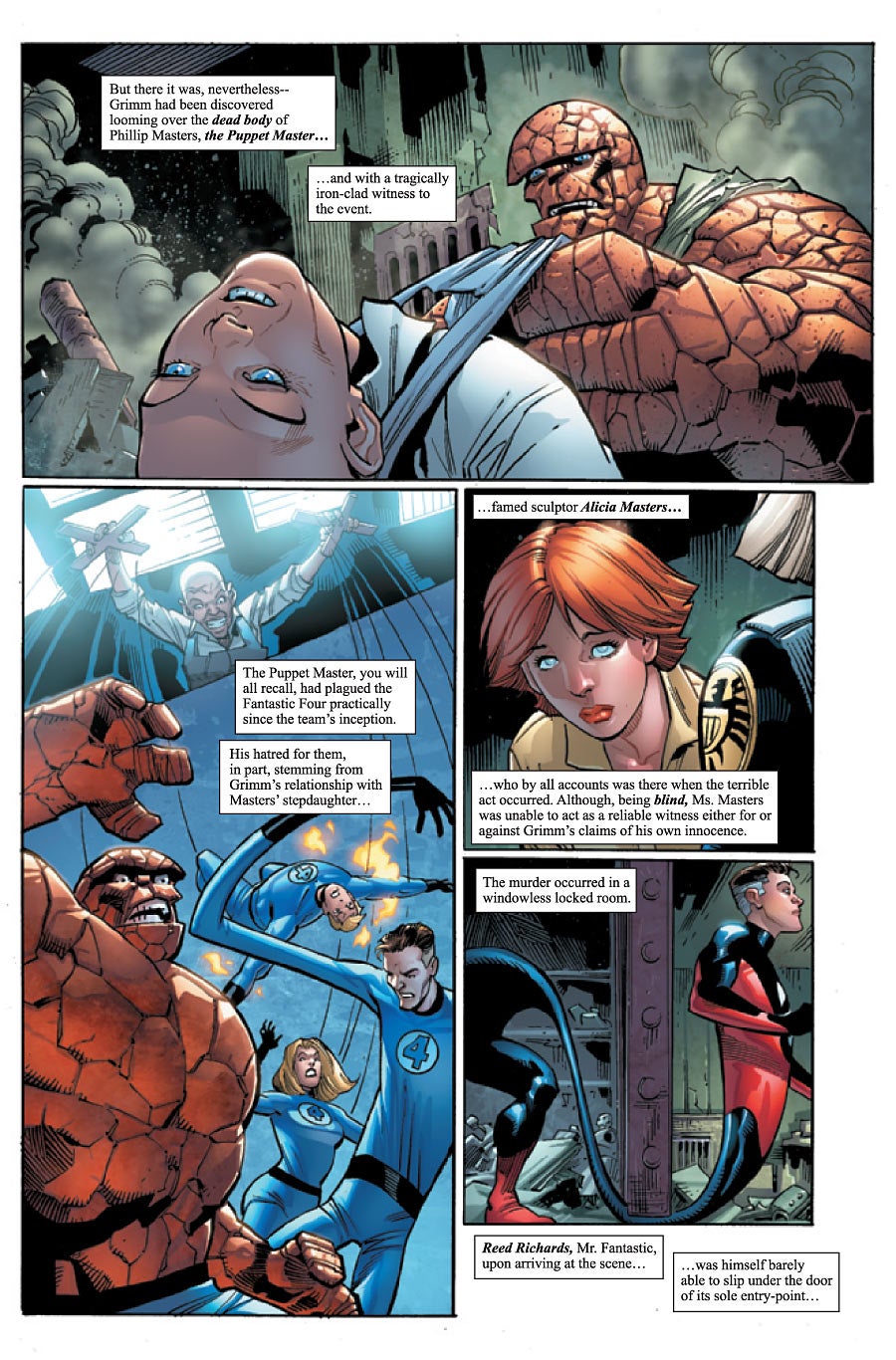 Turning to the art, I'm loving the look of this book. Leonard Kirk is still rocking the pencils and panel layouts and Jesus Aburtov's coloring is perfection. Somewhat surprisingly, I'm not missing Karl Kesel's presence as inker as Scott Hanna has done an admirable job matching the level of quality that I've come to expect from this series.

Kirk does an excellent job across the board in this issue. Faces are expressive, panel layouts are varied, and there are some truly standout moments. Really, he employs a truly excellent level of polish and panache throughout. One of my favorite moments is a visual reference to the cover of Stan Lee and Jack Kirby's The Fantastic Four issue eight which is especially appropriate as this is in fact the eighth issue of Robinson's run, providing a cute parallel for anyone eagle-eyed and knowledgeable enough to pick up on it. Also, his one-panel recap of the failed attempt to turn Ben human again revealed by the events of Original Sin perfectly encapsulates that calamitous cacophony of Kirby-fied science. Further his transition from flashback to present-day with Reed and Ben holding their position from one panel to the next and the details changing around them is beautifully done. Really, I could just go on moment by moment but my words won't convey the quality of his artwork. Pick up the book and give it a look for yourself.

Referencing Aburtov's coloring again, I really am impressed by his work. Through shading choices, he makes clear when the reader is moving from flashback to present-day. Also, he does excellent work across the board in building mood from the intensity of Sue's fight done in blues to emphasize her invisible force fields to the moodiness of Ben Grimm's sunset arrival at Ryker's Island. 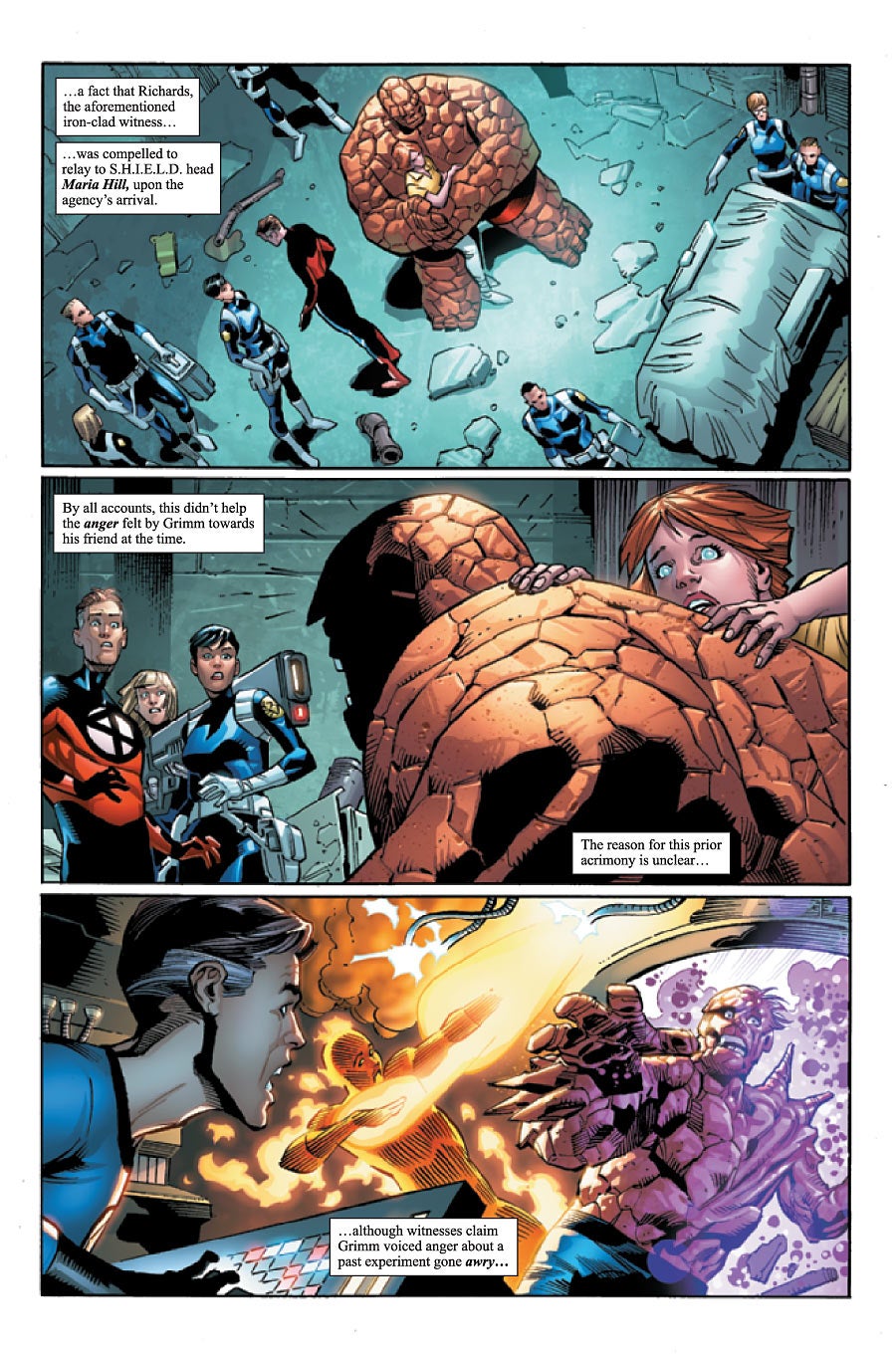 This brings me to the question I posed in the title of this review, who is John Eden? It isn't every day that you have someone who feels like a major player added to the Marvel Universe and Reed Richards new and enigmatic employer has that feeling. My research has turned up no reference to this character beyond this book so I have to believe that he is a Robinson creation and I'm looking forward to seeing what part he will play in this series. Forgive me for speculating but based on my knowledge of comic book tropes, I have to believe that the white-clad humanitarian visionary who has created an eco-friendly technological Garden of Eden and just so happens to be a more than willing employer for Reed Richards in his hour of need is more than meets the eye. Still, knowing Robinson, I feel confident that whatever his place in this story, it will have a satisfying payoff.

Not a lot to say here. Really, the only objectively bad thing in the comic is one panel where Hawkeye is supposed to be shooting arrows at Sue but they are quite obviously on a trajectory to take them over her head. Either the angle of the arrows is off, the perspective is wonky, or the artist was attempting an artistic stylization that simply does not come across to the reader. Whatever the reason, this is an incredibly minor problem but one that I couldn't help noticing. 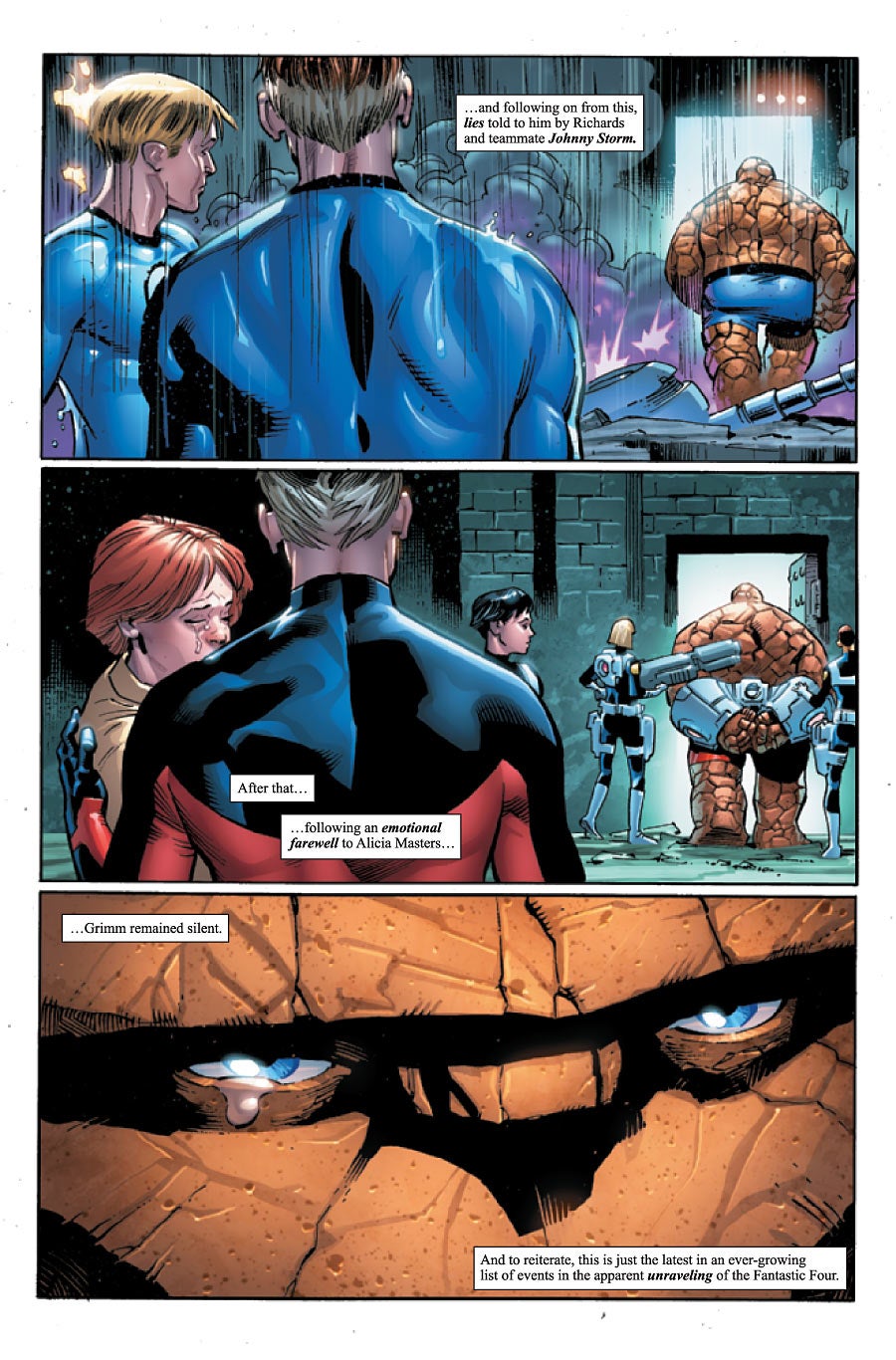 In a past review, I made reference to the fact that while Phillip "The Puppet Master" Masters has unquestionable animosity toward the Fantastic Four, there are numerous examples of his actively attempting to get Ben Grimm and his stepdaughter, Alicia, together. As such, I'm still confused about why he would try to split them up now and why the narrator, Betty Brant in an article for dailybugle.com, would refer to "his hatred for them, in part, stemming from Grimm's relationship with Masters' stepdaughter." Perhaps this is a minor continuity quibble but one that I cannot ignore. Still, there are undoubtedly more twists to come before we learn the truth about the Puppet Master's death.

I'm not a professional artist but looking at Kirk's drawing of John Eden, I'm fairly certain his knees are far too low on his legs, making it look as though he has inordinately long upper legs and short lower ones.

I pretty much already gave this before I got into the details and potential spoilers of this issue. Still, I've said it before and I'll say it again until I have reason not to, this series is a positive must-read. This is shaping up to be the best run on Fantastic Four in years. 'Nuff Said.

Fantastic Four #8: Who is John Eden?