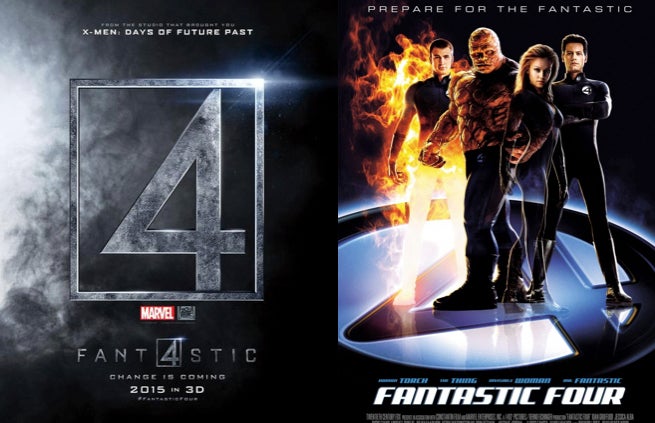 What a difference a decade can make. It's been almost 10 years since Fox's first Fantastic Four film hit theaters, introducing moviegoers to a much different cosmically-powered family than the one featured in today's trailer for the Fantastic Four reboot. And the difference between yesteryear's trailer and today's are as different as night and day. Granted, comic book films were in a much different place back then, but it's tough denying that each trailer promotes two entirely contrasting takes on Marvel's First Family.

Below, we compare the four biggest differences between teaser trailer for 2005's Fantastic Four, directed by Tim Story, to the teaser trailer for 2015's Fantastic Four, directed by Chronicle's Josh Trank. As different as each trailer is, each have their own merits and weaknesses. The comparisons aren't trying to determine which one is better or worse. If anything, it's a demonstration on how malleable comic book stories can be. Different creators can poke, prod, and twist the minor details as much or as little as they want. But as long as they stick to the established foundation, they can tell a serviceable story about their source material.

Check out each trailer below before diving into the comparisons.

The Dark Knight Effect
Josh Trank is clearly going for a grim approach to the Fantastic Four that's grounded in a realism, a style of comic book filming that only became popular after Christopher Nolan's The Dark Knight. Devoid of any humor or anything decidedly super-heroic, the trailer suggests that this film is trying to make a science fiction film that just so happens to star one of Marvel Comics' most fabled franchises. It's the same angle Nolan took back in 2008, when he wanted The Dark Knight to be an urban crime drama that coincidentally starred a comic book icon. This is a far different approach from Story's trailer, which comparatively, tries pulling every clip out of a comic book page. There's costumes, logos, catchphrases, and Easter eggs; all efforts to show that Fantastic Four is another film in the vein of X-Men and Spider-Man. Trank's trailer makes no such effort, instead trying to isolate itself as personal story that's unassociated (as much as possible) with its four-color origins.

Family Feud
If audiences didn't know any better, they could almost assume that Ben Grimm, Johnny Storm, Reed Richard, and Sue Storm are complete strangers in Trank's trailer. While its fairly likely that the two children in the trailer's opening are Ben and Reed, its never actually revealed, which makes it hard to even prove that relationship. Indeed, it looks like fate will pull this team together, with chance and circumstance pulling each member in from there different backgrounds. Story's trailer, meanwhile, showed a very different approach. That film's Fantastic Four are seen palling around on dates and cracking jokes with one another, showing established relationships and shared backgrounds. This approach doesn't necessarily make for a better team, but it does show that the main cast knows each other. In Trank's trailer, the only interaction shown is between Doctor Doom and Reed Richards, which coincidentally, leads into the next major difference.

Impending Doom
Tim Story's first trailer was almost as concerned with its villain, Doctor Doom, as it was with the Fantastic Four. There's no arguing that it made great lengths to show that Doom would be a starring attraction in the film; a great singular force capable of challenging four different superheroes. Heck, it shows him fighting Invisible Woman in his trademark costume. In doing this, the trailer made it clear that Fantastic Four would hinge on the rivalry between Doom and The Four, a classic struggle between the forces of good and evil. Trank's trailer, however, only gives a whiff of the famed Doctor. His role is to deliver an ominous line that underscores the film's larger message of what happens when man tampers with nature. In fact, it's arguable that only those closely following the movie will recognize the man in the hospital bed as Doom. This suggests that Trank's Fantastic Four will either use Doom as a smaller piece in the larger story of man vs. nature, or their just holding off on any big reveals until the next trailer. But, given Doom's diminished role—especially when compared to Story's approach—it looks like the new Fantastic Four will is avoiding or redefining the typical "good guy fights bad guy" formula found in most superhero films.

Regions Unknown
While the trailers in both Story's and Trank's Fantastic Four suggest that main characters owe their superpowers to a scientific accident, the exact nature of each seem far different from one another. In Story's trailer, there was no doubt that the film would draw from the comic book's cosmic origins and send the Four into outer space for their powers-granting experience. Today's trailer, however, gives no such indication. Yes, the trailer does show the four in astronaut attire, but never once does it show them in a space ship or amongst the stars. Rather, they enter a strange pod that could virtually send them anywhere. And that's assuming that they're even going somewhere. Perhaps the Four in Trank's story will gain their abilities in an Earth-bound experiment gone awry, rather than an expedition to some faraway land. The more likely bet, however, is that the pod will send the Four into the Negative Zone or some other dimension. But again, the trailer never actually shows the Four going somewhere in between their times as mortals and superhumans, so it's impossible to accurately call.

Fantastic Four: Comparing The Reboot's Trailer To The Original's