According to series writer James Robinson, the final issues of the current volume of Marvel Comics' Fantastic Four require him to read up on the relatively obscure '90s character Sleepwalker.

The character is a member of a race of "dream police," extradimensional beings who are tasked with apprehending beings that invade human dreams. The one most known to the Marvel Universe was tricked into trapping himself inside of the mind of a college student and became a superhero.

Sleepwalker most recently appeared in Avenging Spider-Man during the Doc Ock/Superior Spider-Man era. He has a history with the Fantastic Four, albeit a somewhat limited one. 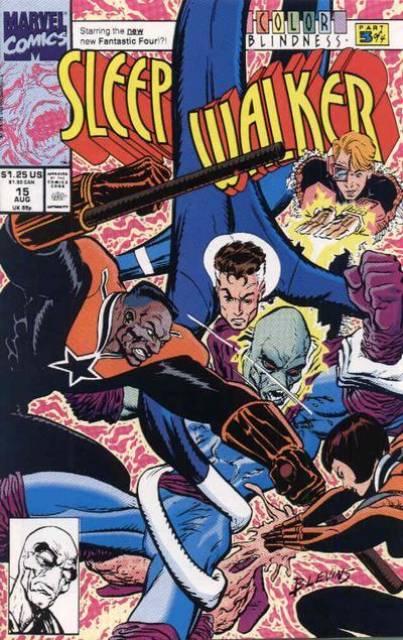 Sleepwalker replaced Wolverine the first time the "New Fantastic Four" regrouped. He helped Spider-Man, Ghost Rider and the Hulk defeat the Sinister Six. He also battled the Thought Police alongside Reed Richards and The Thing in Sleepwalker's own ongoing series.

Sleepwalker played an important role in the Infinity War, helping to defeat the forces of the Magus, by channeling mental powers from Professor X, Jean Grey, Psylocke, and Moondragon through the mind of his host, Rick Sheridan.

Where the character comes into the current Fantastic Four story seems pretty clear. In the most recent issue, Reed says to John Eden (who is shortly thereafter shot and presumably killed by the issue's real villain), "And then there's the energy you're having me study. A form of kinetic energy collected from humans, Cully told me. Maybe that's what you told my assistant it was. But it's not the truth, is it? It's some form of neural electro-pulse emitted from the mind's subconscious -- in layman's terms... ...dream energy. With the exact -- I'm talking 100% -- same signature as the creatures that came through the portal.  Attacking Manhattan and beginning my family's downfall.  Is that why you did all this?  To acquire that power?  Dream energy from the imagined world my son Franklin created with his mental powers?"

The idea of a world created via mental construct infringing on the Marvel Universe sound somewhat similar to the way a clone of Sleepwalker once simulated his powers to bring dark versions of superheroes to the Marvel Universe. Even if not, any story that involved "dream energy" could be a natural place for him to appear.