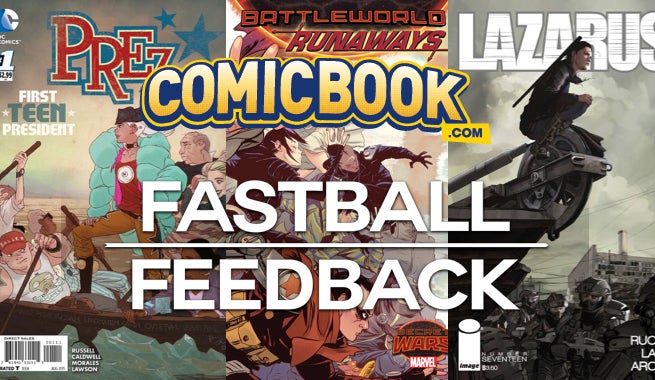 Wisdom may come with age, but it's learned through youth. The mistakes and discoveries we make as adolescents and young adults help inform what we know throughout our lives. They also make for some great stories. This week, Fastball Feedback takes a look at comics with plenty of youth in revolt. From hashtagged presidencies to dystopian family-epics to runaway superheroes, these stories capitalize on the lessons that can only come from rebellion.

Prez is a true cult-classic of the DC Comics' pantheon. The concept of a teenage president has appealed to greats like Joe Simon and Neil Gaiman, but has never stuck around for long. This newest launch features Beth, a young woman elected on Twitter after an embarrassing video garners her popularity as "Corndog Girl".

There's not much of Beth to be seen in Prez #1 though. Mark Russell does introduce her, but is far more interested in showing off the world she lives in. It's a funhouse extrapolation of the current American political climate, taking inanities targeted on The Daily Show and Last Week Tonight to illogical extremes. And like those shows, Russell has an excellent eye for lampooning politics. He embeds his criticism with plenty of silliness that's never bogged down in details. But despite these excellent moments, the issue lacks shape as a whole. The ending hits abruptly without a notable cliffhanger, giving the scene a sense of randomness instead of purpose.

Keeping with the slapstick tone, Ben Caldwell depicts this cartoonish version of reality in perfect style. Everything is bigger and wilder, but still recognizable. There's a smooth flow to his pages, but it's the details that really make the book. Caldwell's designs for Mr. Smiley and his cohorts, along with various other futuristic touches, are equal turns creepy and endearing. And the addition of Mark Morales as inker makes for a notable improvement from the 8-page preview presented last month. Morales helps make Caldwell's characters pop with soft, smooth linework. This along with Jeremy Lawson's high voltage colors ensure that Prez #1 will read like a well-produced pop medley.

It's the potent combination of fierce ideas and rich, enjoyable art that really makes Prez work. Never vitriolic nor too silly, it walks the same razor's edge that any good satire must, cutting its audience without them even noticing. For an issue that works only to establish tone and setting, Prez is surprisingly effective. If the titular character has as much life to her as this world, then this series ought to be a real delight. 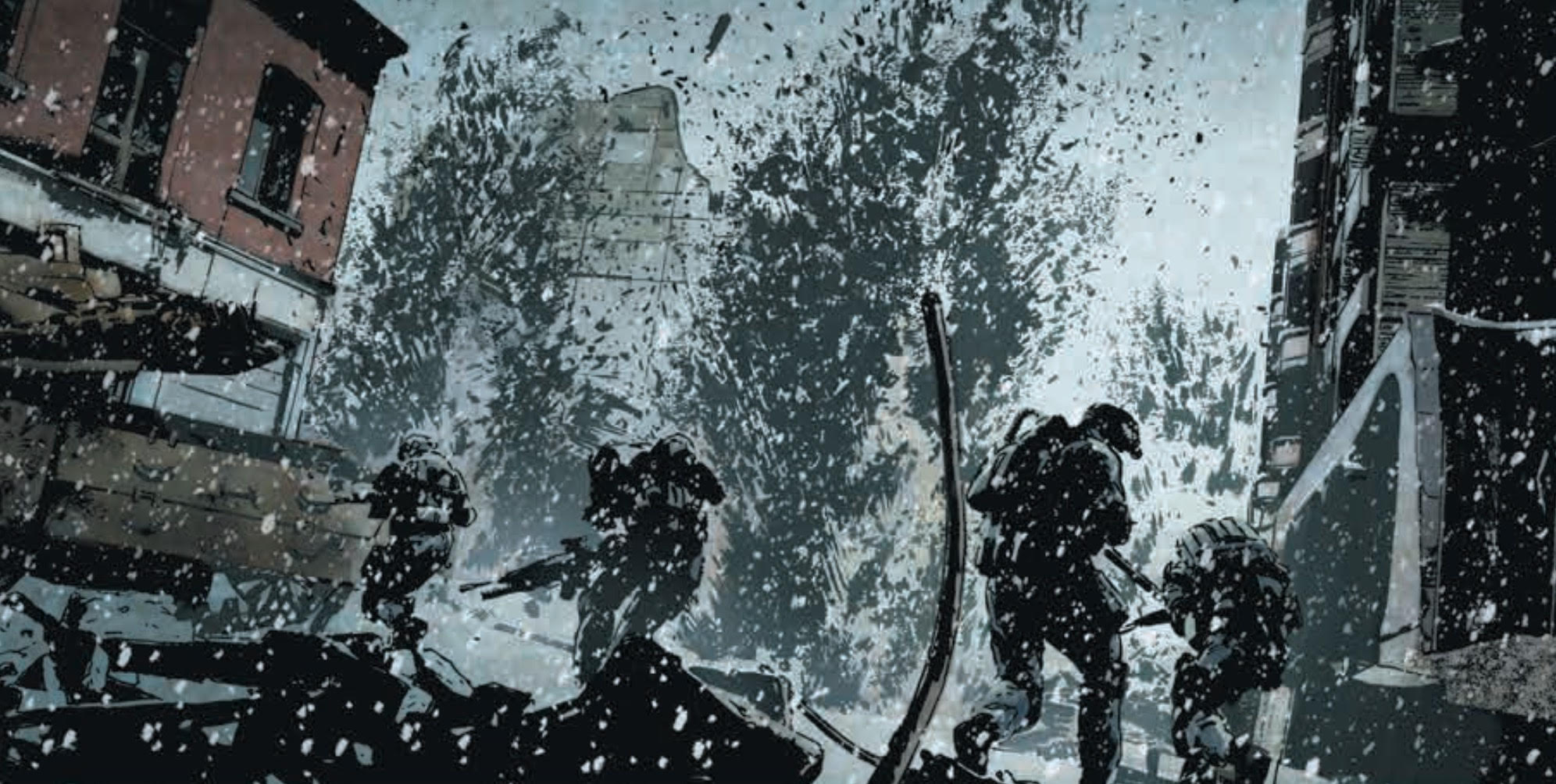 Lazarus returns with its newest arc ,"Poison," and a world at war. Following the events of "Conclave", Carlyle and Hock have gone to war and with Malcolm comatose, Forever has become more important to her family than ever. The issue opens with a battle waging in the crumbled landscape of Duluth, Minnesota before examining the new status quo.

And we finally have a pay-off to Greg Rucka's introduction of two new point of view characters, Red and Barrett. Not only did they provide perspective into the lifestyle of Serfs and Waste, but they now offer a very necessary expansion of scope. The beginning of a war and Malcolm's illness both require information and experience that Forever's story alone cannot provide. Nothing about Lazarus #17 appears any less focused in spite of the increased number of plot lines. Every scene, from military briefings to bedside sentiments, progresses the story and provides valuable information.

Lazarus #17 opens on its best scene, bereft of dialogue or recognizable characters. Michael Lark (with some ink assists from Tyler Boss) charts a confrontation between a Carlyle unit and Hock forces with the same tension you'd find in The Hurt Locker. Events occur suddenly and chaotically, making the encounter feel all the more realistic. Bombshells and bullets fly without warning, blurring the air. The opening salvo of detonations land with the same surprise for readers as they do for the soldiers, all thanks to a well-planned page turn. Yet even with frenetic pacing, the action is always clear and followable. Lark selects the best possible moments to depict, so readers never have to second guess what they are reading mid-battle.

The excitement and ferocity evoked in this battle, which includes only one recognizable character (who is not even recognizable until later), reveals Lazarus' true depth. Forever may rest at the center of this story, but the world Rucka and Lark have constructed is complex and open for a great deal of exploration. Lazarus #17 is another taut chapter, delivering political and visceral thrills in an increasingly immersive series.

Runaways #1 tells a story about prep school kids from across Battleworld trying to pass a final exam. With that, Marvel has the best pitch for any Secret Wars tie-in so far. Sure, there are superpowers, a maniacal headmaster, and potentially deadly tests, but it's really about a bunch of students trying to get through school. It's small, personal, and pretty refreshing in an event filled with multiversal stakes.

The first issue is all about introducing this new round up of "Runaways," with only one familiar face from previous volumes, and none of the familiar settings or premise. Sanford Greene does a good job characterizing the core cast of 8-9 teenagers through an action sequence. He provides almost every character with at least one defining moment (Jubilee's friends sit on the side lines sadly), and gives readers an easy hook. It's a great use of action-driven storytelling. Greene also indulges his characters with bubbly facial expressions, leaving no doubt how anyone feels about anything. Considering the tone and genre of the story, his style couldn't be more comfortable.

This clear expression of character makes some of Noelle Stevenson's work redundant. Captions beneath each character are filled with mostly useless information, unless you've intensely studied a map of Battleworld. Her knack for quips and snappy dialogue make these "Fun Facts" seem even more out of place. There's no doubts to be had about who these people are or how they interact after 20 pages. Unfortunately, many of these character beats are repeated and the avoidance of a central conflict until the final page does the issue no favors in building momentum.

Runaways is quickly shaping-up as the Secret Wars tie-in with the most potential. Stevenson and Greene are clearly engaged with the story they're telling, and it's difficult to resist smiling and laughing along with them. This comics all about silly, over-dramatic, high school antics, and it's just the sort of friendliness that clicks with youthful heroes.