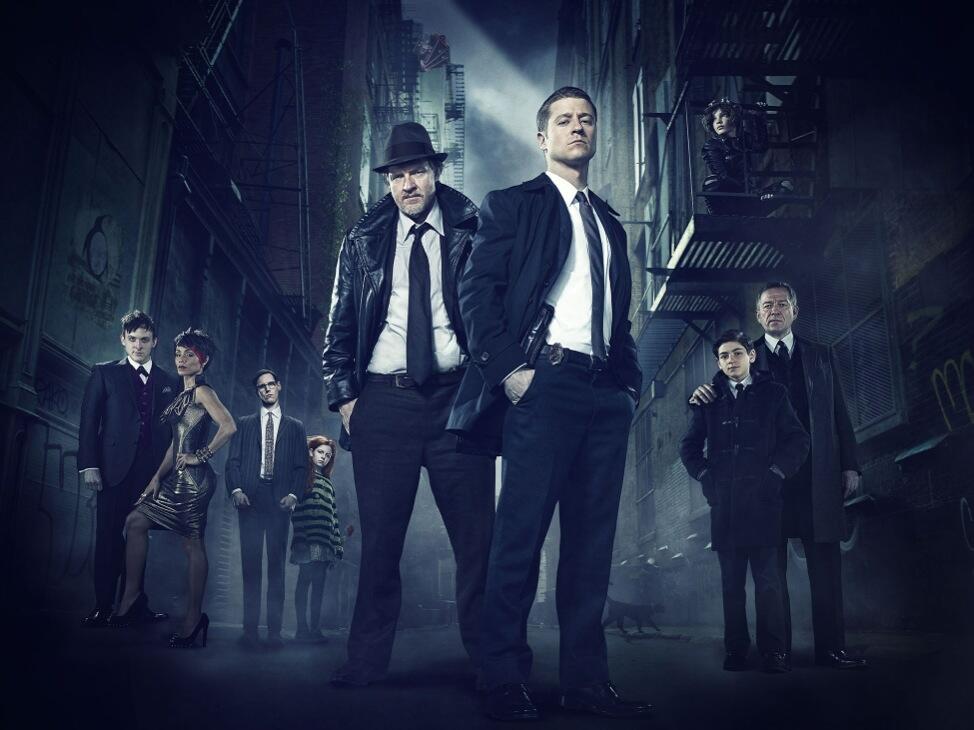 FOX and Warner Bros. Television have released the first official cast photo from Bruno Heller's Batman prequel Gotham. Featuring series co-leads Ben McKenzie (James Gordon) and Donal Logue (Harvey Bullock) front and center, they're flanked by the future "good guys" on the right and "bad guys" on the left. That assumes, of course, that Catwoman counts as "good," since she vascillates between villain and antihero -- and also raises questions about Harvey Bullock who, in the comics, has often been written as morally ambiguous. Behind the Gotham City Police Department leads, the photo features (from left) Robin Taylor as Oswald Cobblepot (who will one day become The Penguin), Jada Pinkett Smith as gangster Fish Mooney, Cory Michael Smith as Edward Nygma (the Riddler), Clare Foley as the girl who will one day become Poison Ivy (credited on IMDb as "Ivy Pepper," but named Pamela Isley in all previous iterations), David Mazouz as Bruce Wayne and Sean Pertwee as Alfred Pennyworth. The image is also packed with Easter eggs meant to foreshadow the direction the city will take in the future (click on the image above for a larger version). Next to Cobblepot on the wall is a poster or sign featuring a penguin, a nod to who he'll eventually become. Similarly, Selina Kyle sits perched on a fire escape not high above a cat that's crawling through the alley. There's question mark graffiti (likely a nod to who Nygma will eventually become, unless things get really crazy and The Question pops up in this show) and of course the rose that little Poison Ivy is holding. At the top, you can see a spotlight shooting across the sky, reminiscent of the bat-signal...and the Joker playing cards atop a building or billboard.