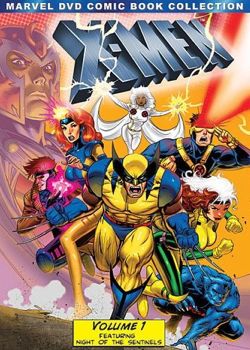 After digging up videos, buying bootleg DVD's and skipping through thousands of listings on eBay, fans of the early 1990's TV series X-Men can finally save themselves trouble and possible money. On April 28th, 2009 the series finally made its long-anticipated debut on legitimate DVD. The first thirty-three episodes of the series will be released in two volumes, with hopefully the rest of the seventy-six episodes to follow.

One of the things that made the show so popular was its adherence, mostly, to the mythology of the X-Men and its vast supporting characters. Most storylines and episodes had justice done to them, and the show wasn't afraid to portray characters such as Sabretooth and Magneto as complicated and ruthless as they appeared in the comics. The show also had no problem extending some storylines, such as the Phoenix Saga, to more than just a one or two episode arc in order to tell the story as it should be told, not watered down for time.

With that in mind, here are five memorable episodes of the series, in no particular order, that made this show the standout that it was.

Night of the Sentinels (Season One) - The one that started it all. Using teenager Jubilee as a vehicle to introduce the uninitiated to the X-Men was a smart idea, and it provided an easy-to-follow storyline for the first episode, with the Sentinels charged with rounding up mutants and Jubilee being one of their targets. This episode also established the somewhat serious tone of the series, as the X-Men bravely established themselves in a world of hostility and violence towards mutants. The first two episodes served notice that this would not be just any "kids" cartoon.

Phoenix Saga Part Three (Season Three) - While this episode comes in the middle of the Phoenix Saga story arc, it's one of the most classic of the series, and not simply for the infamously funny "Juggernaut Bitch" phenomenon that relies heavily on this episode. This has a battle royale not seen in many parts of this series. With all the X-Men, plus Banshee, squaring off against Black Tom, the Juggernaut and Eric the Red, it's an action-packed story from start to finish, featuring one of the greatest throws in all of comic book history, when Gladiator, on earth from the Shi'ar Empire, sends Juggernaut flying across the sea.

One Man's Worth (Season Four) - The strength of this episode lies in the fact that it underscores so much of the value of Charles Xavier in the Marvel universe. When assassins Trevor Fitzroy and Bantam travel back in time to kill Professor Xavier, they set off a series of events that turn the future/present into a hellish situation, where Magneto wages war as humans try to fight back. Storm and Wolverine are married, and a risky move with Forge's time machine is required to try and make things right with the world, just the way Charles would have wanted.

Graduation Day (Season Five) - A hallmark of great shows is that they have an equally great and effective ending. In this final episode of the show, Professor Xavier is critically, and it appears, mortally wounded at a conference on human/mutant relations. With no other earthly options available to save him, Lilandra, his star-crossed lover, comes to take him to the Shi'ar Empire, where their advanced technologies can help him to survive. A touching scene follows where he has the opportunity to say good-bye to each of his X-Men, summing up perfectly the humanity of the series.

Lotus and the Steel (Season Four) - Wolverine was focused on in a few of the episodes, but this one showed part of what he truly longed for: peace. Retreating to a small village in Japan and renouncing his allegiance to the X-Men, he quickly tries to settle into a life away from the rage that led to this decision. Silver Samurai soon emerges, disrupting Logan's best-laid plans. After struggling as to whether to interfere in his activity or not, Wolverine emerges as the hero he is to take down the evil warrior in combat, showing what his true strength was, his cunning.

Hopefully viewing these DVD's will bring back good memories and favorite episodes to all who choose to watch. Even though some childhood shows and cartoons lose their luster years later, X-Men certainly wouldn't fall into that category. It's a cartoon for the ages, the quality, storytelling and characterization timeless.