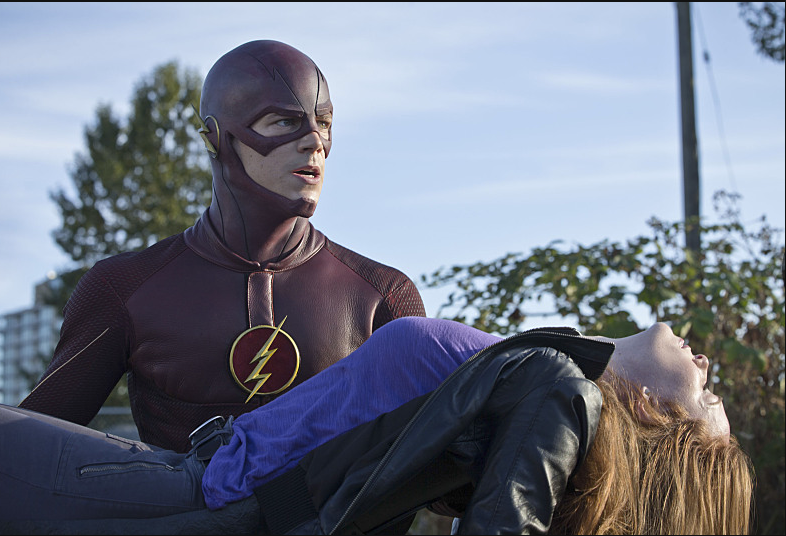 “Plastique” opens with Barry, Iris, Eddie, Cisco, and Snow enjoying a night at the bar. As Barry watches Iris and Eddy flirt, he reflects that he still wants to be more than friends with Iris. Barry tries pounding dozens of shots, but realizes that he can’t get drunk thanks to his hyper metabolism. Cisco and Snow, ever the scientists, are fascinated by this. Barry, forever a twenty-something, is disappointed that he’ll never get his buzz on again.

Elsewhere, a woman attempts stealing files from an office. When a security guard confronts her, she sets off an explosion. Eddie gets the police call, which Barry overhears. Donning his scarlet uniform, Barry runs to the skyscraper. It’s there that Barry and Cisco discover that if Barry runs fast enough, he can travel vertically up buildings, gravity be damned. On his way down, he runs into Iris, who is still pursuing him for her blog. Flash vibrates his face into a blur so that she can’t recognize him. Later, Barry visits the crime scene with Captain West and Eddie. As they investigate, Eddie discovers that the arsonist was after a file. Behind closed doors, Barry moves through all the filing cabinets at super speed until he discovers the missing files on Bette Souci.

Back at the Central City Police Department, Army General Eiling confronts Captain West and say that the arsonist is a former Army soldier. They demand that CCPD turn the case over to them, which West begrudgingly does. When he returns home, Captain West asks Iris why she was at the bombing site the night prior. She admits that she’s following The Flash (or “The Streak”) for her blog, and is fascinated by him.

When Barry returns back to home base, he tells the team about his military encounter. Dr. Wells reveals his prior relationship with General, and tells Barry that the General once researched mind-control methods for the military. Cisco manges to find a peg on the on Bette Souci. Barry dresses up as the Flash and finds her walking the streets of Central City. When he confronts Plastique, she touches The Flash on the chest, which causes it to blow up it. Barry must shed the suit before it explodes. When he returns to STAR labs, suit destroyed, the team discovers that Souci is a metahuman who can make bombs from her fingertips.

Barry now understands why General Eiling was so interested in Suce. Then, Captain West shows up and tells Barry that he must stop Iris from pursuing the Streak any further. Without wasting a second, Barry sprints to Iris and tries discouraging her from furthering her investigation. Angered by Barry’s doubts and confused by his sudden disinterest in the supernatural, Iris storms out. Cisco then calls Barry and says that Souci was spotted near a military lab, a site where she was once experimented on by a military doctor and General Eiling. Barry races to the compound as Souci confronts the military doctor. Barry convinces Plastique to come with him, since he encountered a similar metahuman transformation. The two depart the facility just as General Eiling arrives.

The Flash brings Plastique back to STAR Labs, where Wells explains how the Particle Accelerator ignited the explosive powers residing in her genes. Cisco and Snow say that she’s not the only metahuman—but according to Cisco, none are as pretty as her. The flirtation falls flat. Fortunately, she’s not too disgusted to leave STAR, and agrees to have the team test her. As Snow conducts her tests, she discovers that Eiling’s men shot her with a tracker. Plastique thought it was just a flesh wound from a bullet. But it’s too late: Eiling and his men storm STAR Labs. Eiling and Wells confront one another, where they allude to a mysterious partnership in the past. Put that conversation in the drawer of scenes foreshadowing Well’s villainy. Bu as Wells distracts Eiling with the banter, Barry runs himself and Plastique out of STAR Labs.

At a safe distance, Barry receive a call form Captain West. Apparently, Iris was not deterred by her conversation with Barry. In fact, she was fueled by it. Not only is she continuing to blog about The Streak, but she is now putting her names on the articles. Sensing an opportunity, Barry dons his Flash uniform and confront Iris at her waiting job. The Flash tells Iris to meet him on the rooftop. There, he tells Iris to stop writing about him. Iris is filled with questions, but Barry refuses to answer any of them. He says that there more to his life than she can understand, and begs her to stop. Iris tells the Flash (not knowing that he is Barry) that her friend, Barry, believes in supernatural occurrences like the Flash, and would greatly benefit from meeting him. She wants Flash to prove to Barry that the impossible is possible. That’s why she’s following the story so closely The Flash says nothing, and departs.

Back at STAR Labs, Snow tells Plastique that the tracking device in her arm has melded with her DNA at a cellular level. Her body is now even more unstanble, and could blow at any given time. Barry argues that STAR Labs should let her stay, so that they can help her. Wells, Cisco, and Snow aren’t convinced, afraid of the dangers. The discussion unfinished, Barry leave for CCPD. There, he admits to Captain West that he wants to reveal his secret to Iris. Captain West drops the a bigger truth bomb though, telling Barry that he’s always known that Barry carries a secret love for Iris. In fact, he’s been greatly amused by it. Which, considering his role as Barry’s surrogate Dad and Iris’ well—Dad, is a little creepy.

Alone at STAR Labs, Plastique and Wells talk. Wells Souci that the only way to stop Eiling from hunting her, or other like her, is to kill him. Convinced, Souci leaves for the General’s head. Cisco eventually locates Plastique at General Eiling’s base, and The Flash takes off after her. Plastique “surrenders,” which draws General Eiling out in the open. Plastique tries blowing him up, but fails. But even after the Flash arrives, Eiling shoots Eiling in the chest. As she dies, her body begins glowing. She’s going to explode, and soon. The Flash must run her body far away as fast as possible. The only safe place is the nearby bay. Cisco surmises that if he runs fast enough, Bary can also run on water. Running Plastique out into the open ocean, he drops her body into the water right before she detonates. Barry barely outruns Souci’s blast. When he returns to shore, he sees the mushroom cloud that Souci’s body left behind.

General Eiling covers up the explosion to the media, saying that it was a military test. Depressed that he failed Souci, Barry goes to see Iris at her home. There, Barry unloads as much grief as he can, without compromising his identity. But he segues the conversation into how much worse it would be to lose a family member. He begs her again to stop covering The Flash. When Iris asks why he’s giving up on the tracking the impossible, Barry says that he’s just over it. Iris says her interest in The Flash is beyond Barry’s concerns now. Deflated, Barry says that it’s best that they don’t see each other for a while.

Barry retreats to a bar, where Cisco and Snow meet him. Snow gives Barry a special 500-proof shot of alcohol that she made herself, which gives Barry the five-second buzz he needs. Barry enjoys the rest of the night with his friends, while Iris bemoans her broken friendship with Barry.

Of course, the episode ends with another Wells cliffhanger. General
Eiling visits Wells at STAR Labs. He tells Wells that he knows that Well’s Particle Accelerator the metahuman rise, The Flash and Plastique included. But Well’s threatens to blackmail the General for his former illegal experiments. A flashback to five years ago occurs, we see a younger Eiling and The General about over cruelly experimenting on a test subject. Wells says that the tests on the subject must stop. The test subject? A gorilla with a name none other than Grodd. With Eiling forced to leave Grodd alone, Wells tells his pet gorilla that he has much bigger plans for the primate who will one day become one the Flash’s deadliest rogues.