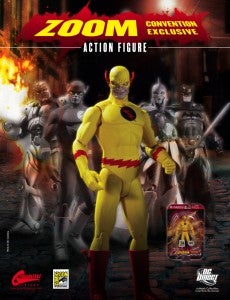 The Zoom action figure will be offered for purchase at the Graphitti Designs Booth (#2315) at the San Diego Comic Con. Zoom stands approximately 6.5” inches high, features multiple points of articulation and includes a removable display base. San Diego Comic Con attendees will each be limited to only one Zoom figure each.