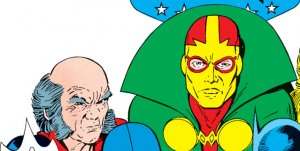 What if the creative team who reinvigorated the Justice League franchise in the '80s came to the beleaguered New Gods? It could have happened. In the midst of a Twitter discussion with Image Comics co-founders Rob Liefeld and Erik Larsen earlier today, Worlds' Finest artist Kevin Maguire revealed that he, along with writers Keith Giffen and J.M. DeMatteis, had pitched a New Gods series to DC Comics as part of the New 52 launch last year, but were rejected. "I've gone entire decades without following characters like Batman and Spider Man," tweeted Liefeld. "Don't connect even though they're ridiculously popular." Larsen agreed, "Same here, robertliefeld. I don't buy ANY of the books I followed as a kid although I do pick up Spider-Man if the art is good." He noted that he'll buy any book if he likes the art, and added, "If there was a New Gods revival by a creative team I liked--I'd be all over it, I won't blindly buy anything." That's when Maguire joined the conversation, saying, "Giffen,DeMatteis and I wanted to do New Gods for the New 52, but we were shot down." When fans suggested that DC missed an opportunity by passing on the book, Maguire was diplomatic, saying that he was under the impression the company simply had other plans for the characters before their pitch even came in. This isn't the first all-star creative team to make a rejected pitch in The New 52, or even the first to mention their pitch publicly. In the earliest days of the relaunch, it was widely rumored that Brian Wood was to take over Supergirl. When Michael Green and Michael Johnson got the title instead, Wood wasn't particularly shy about the fact that the book had been offered to him, and then taken away. Later, Gail Simone revealed that she had pitched a series starring (among others) former Spoiler and Batgirl Stephanie Brown. "This was a book I worked on for a year with alterations. I wanted to do a girl team book featuring Black Alice, Misfit, a young Bumblebee, and led by Stephanie Brown. They would all be going to the same high school. The plan was to have [Bryan Q. Miller] co-write it with me," Simone told fans via her Tumblr back in August. "It went through lots of permutations and changes but eventually, they passed on it, which was understandable but a little bit (okay, a lot) heartbreaking. I don't want to say more about it, but that's a big reason why I was hopeful about some of those characters, because it seemed a pretty exciting premise." At the Albany Comic-Con back in June, sci-fi superhero icon Jim Starlin revealed to fans that he, too, had pitched a series to the New 52, which had been rejected but which he hoped to recover at some point. He was unclear about the book's concept, except that it involved Mongul, a villain he co-created with Before Watchmen: Ozymandias writer Len Wein.

Giffen, DeMatteis and Maguire Pitched New Gods For the New 52

Spawn, Gunslinger, and She-Spawn Get the Spotlight in Stunning New The Scorched Covers (Exclusive)