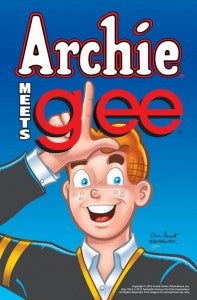 Move over, KISS - Archie and company have a new musical act heading for Riverdale coming at the end of 2012 or the beginning of 2013. According to a report at USA Today, the publisher has announced that the cast of FOX Television's Glee will join the iconic high school comic book series in a crossover story written by Roberto Aguirre-Sacasa, with art provided by Dan Parent. Unlike the recent KISS miniseries, the story suggests that the Glee crossover will not be a standalone miniseries but rather the story will be told in a four-issue arc in Archie Comics. Aguirre-Sacasa is perhaps best known to comic book fans as the writer of Marvel's The Stand: Captain Tripps graphic novel, but his day job is that he works in the writer's room on Glee. "It turns out he's been a fan of Archie for years. His most recent Halloween costume? He was dressed as Archie!" Archie Comics Co-CEO Jon Goldwater said of the writer, who he met last year at New York Comic Con. "Glee is courageous in their story lines and how they represent their characters, how they represent the high school situation," he said, indicating that the story would feature a number of characters from both of the universes. One supposes that Kevin Keller is an obvious choice for a lead given the role that the Glee cast and their characters play in the LGBT media community, and of course who doesn't want to see Josie and the Pussycats hanging out with the Glee crew? Goldwater said that Archie, too, endeavors for a real, heartfelt interpretation of the high school experience. Look for more details from the story to come out of San Diego Comic Con later this week.