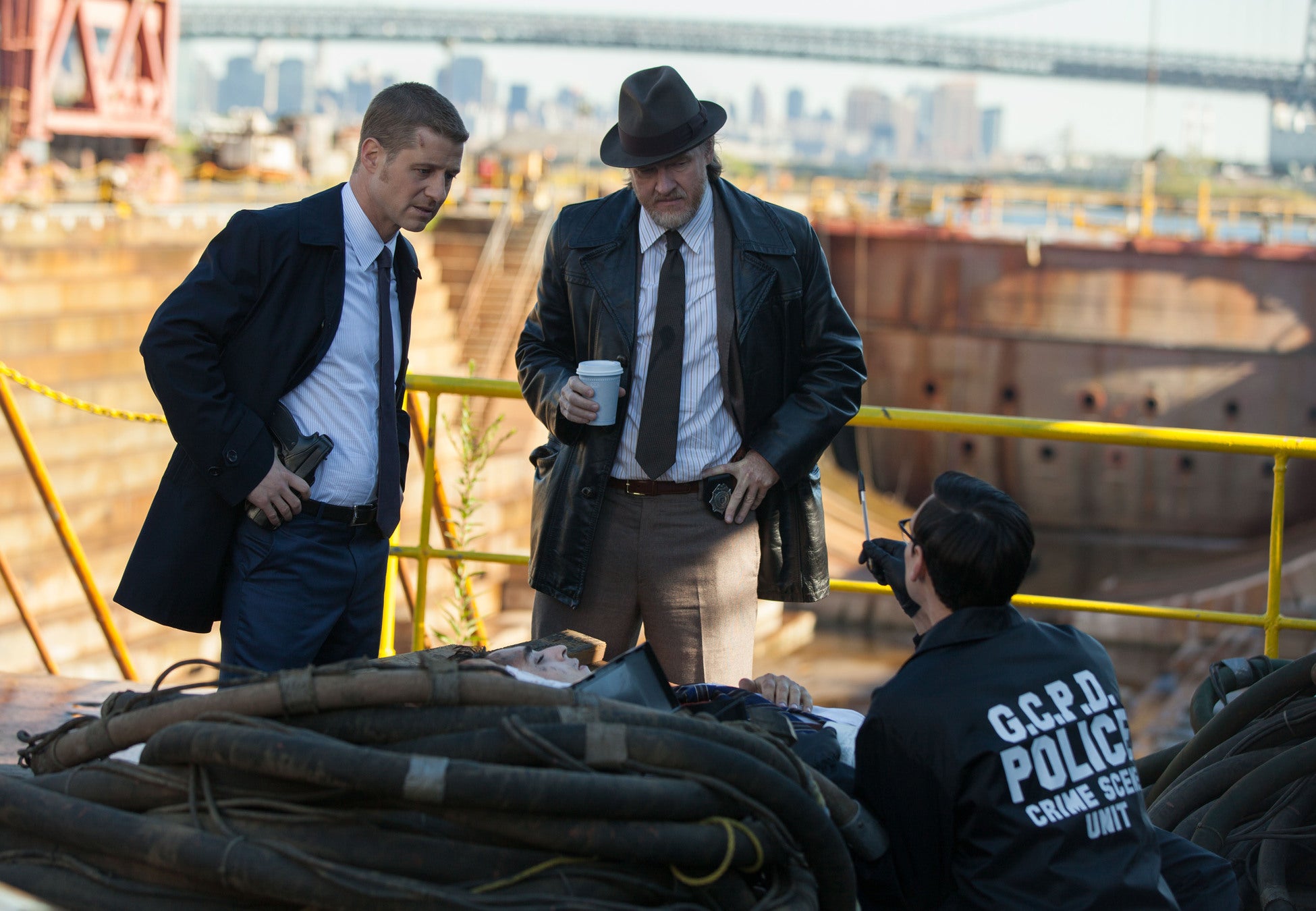 The episode opens with a man stumbling through a closed office, with flickering lights, wearing a ski mask over his dress casual. He's nervous, and as he makes his way between the cubicles, you can see why; another man dressed the same way comes out and the pair start brawling ruthlessly, culminating with one of them killing the other one with the blade shorn from a paper cutter.

The next morning, Harvey, Jim and Nygma are on the docks, where the body has been dumped. Nygma says that the time of death was midnight, but that the body was moved. Gordon heads off to interview the homeless in the area, and Ed stops him to point out that he found a finger in the man's mouth -- one belonging to the man he was fighting.

Across town, Penguin stops a wealthy woman walking in the street with her dog; he admires her brooch and then insists she gives it to him. He brings it to Fish, where the pair play nice.

Eventually, she opens the box and stabs the needle on the brooch through his hand, threatening to kill him as soon as Falcone is out of the way. Penguin keeps his calm, and tells her to convey his respects to Don Falcone.

Bruce arrives at school, where Alfred tells him that homeschooling isn't an option because he needs to be around other kids.

The murder victim's mother comes to see the police; she tells him that her son worked at a coffee shop but was dressed for job interviews in finance.

In Essen's office, Bullock tells her that Gordon won't work with other cops now becuase they all betrayed him. She says he will have to get over it.

Back at his mother's house, Peguin brings the brooch to his mother, who asks him about the injury to his hand. She tells him that when she was a child, she was bullied by a jealous girl -- and retaliated by turning her parents over to the Secret Police.

Gordon and Bullock head to a black market doctor, who is operating on a man with a gunshot wound. They ask him about a man with a missing thumb and he first denies knowledge of it, then relents when Jim finds evidence of the same printer toner in his "operating room" that they had found on the corpse. He gives them a business card for Sionis Finance, but Jim arrests him anyway. At the police department, all the other cops are upset that Jim is playing hardball and even Bullock asks him to reconsider, but he won't.

He heads home, where Barbara is waiting for him with a gun drawn; he was late, and didn't turn the light on when he came in, so she got scared. He chastises her for handling a gun after she's been drinking. She's still terrified of Zsasz, but Gordon tells her that he won't let anyone hurt her. She doesn't believe him, asking him to tell her that there aren't any monsters.
Cut to the office building from earlier, where three men, all dressed identically to the killer and victim from earlier, are in cages. A man in a suit and a grotesque mask is there, and when they ask when they'll be allowed out, he says it's up to them.

The next morning, Gordon is gettin ready for work. Barbara comes out to apologize. He'd been packing up his extra gun to take to work but she convinces him to leave it and send him off to work.

At the morgue, Nygma starts his autopsy, finding a thumbtack in the man. He continues his work until the real coroner comes in and kicks him out.

At school, Bruce is sitting alone by a fountain when some girls walk by, smiling at him warmly and saying hello. A pair of boys come to see him, one called Tommy, who asks him about his parents' murder and continues to press when Bruce doesn't want to talk about it, following him when he leaves for class.

At a nearby church, Fish meets up with her "weapon" Liza, who tells her nothing much has changed -- she's still cleaning and cooking for him. Fish tells her to copy his ledger out of a locked drawer. She wants Liza to slip him a drug to make him sleep.

Bullock and Gordon make their way to Sionis, where all of the men in the office show signs of having been in fights. Richard Sionis greets them, and denies knowing the man who was killed. When Bullock asks him about his warrior fetish, and the resultant conversation pushes him into an adversarial conversation about the nature of real and metaphorical war with Gordon. Gordon tells him he knows he's responsible for the death, and that he'll prove it.

Back in the office space below, Gordon finds a trail of blood and follows it into a bathroom, where he finds the man with the missing thumb.

Back at school, Bruce is being harassed by Tommy and a pair of other boys, who jump him after he insults Bruce's mother and Bruce slaps Tommy.

Penguin's people bring in Timothy, the man who has his old job with Fish, to be questioned, and beat him when he declines.

At the police station, Gordon and Bullock convince the man with the missing thumb to admit that part of the Sionis hiring process is that the top three candidates have to fight it out for a job -- no one was supposed to die, but no one was particularly upset when it happened, either. Confidentiality agreements signed by all parties make it collusion. Essen asks where the fight was held, but Bullock says the victim was blindfolded before being taken there. Nygma comes in with analysis that reminds him of four previous murders done in similar fashion.

Before they can secure the signature on the man's confession (his name is Adams), an attorney arrives and tells them that he's advised Adams to remain silent and will consider any previous statements to have been made under duress.

While Bullock starts looking for the location of the killings, he and Essen bemoan how Gotham has become following the deaths of Thomas and Martha.

Bruce comes to see Alfred, who is upset to see Bruce hurt.

Gordon and Bullock split up to find the office building, and as soon as Harvey is gone, Jim's phone rings. It's Barbara, wanting to check in. When Jim is too busy to talk and hangs up, she eyes the Scotch.

At Falcone's, Liza drugs his tea and is almost caught by one of his men.

At an abandoned building owned by Sionis, Gordon makes his way inside to find the men in the cages. Before he can free them, he's tazed unconscious by Sionis.

A group of police officers intercept Selina, who is shoplifting a number of furs from a high-end store.

Alfred brings Bruce to Tommy Elliot's house, presenting him first with his father's watch. Bruce rings the bell and, gripping the watch, punches the hell out of Tommy. Alfred stops him, but then warns Tommy to remember the next time he messes with Bruce that Bruce tried to kill him, and Alfred let him try. The leave, leaving Tommy clutching his face on the stoop.

At the PD, Bullock worries when Gordon hasn't checked in.

Back at the office building, Sionis wakes up Gordon and puts him in the middle of the three men, telling them whoever kills Gordon wins, get sthe job and a million dollars. They rush at him. Elsewhere, there's a bunch of people watching on a TV screen.

At the police department, when nobody will help Bullock, he berates the room. Essen offers to pitch in, which guilts Alvarez into helping out, then a bunch of others.

Back at the office, Gordon is holding his own against the three men, with the crowd on the other end getting really into it. He knocks all three of them out, so Sionis enters the fray with a sword, wearing his mask. He asks Gordon where the other cops are, and Gordon says he doesn't need them. He jumps at Gordon with the sword, and Gordon finds one of the paper cutters and fences for a while, until he's briefly disarmed. He overtakes Sionis but does not kill him, joined quickly by Essen and a beat cop, who take Sionis in after he tries again to go after Jim, this time with a knife.

At Fish's club, Liza arrives. She tells Fish that she wants out, that Falcone is going to find out, and asks her if it's worth it. Fish says it isn't; that she grew up in poverty with a prostitute mother, whom one of Falcone's men killed becuase he was dissatisfied with the service. She pledged then to never again be powerless.

Liza provides her with a piece of paper -- numbers from the ledger -- and Fish says it's a thread she can pull to make the Don come undone. She tells Liza she won't let anything happen to her, and makes her say she believes her, then kisses her on the cheek.

Back at Penguin's, Timothy is hanging upside down. The Penguin gets him to admit that Fish has someone close to Falcone, and then tells his people that no one can find the body, since they're at peace.

At the PD, Gordon thanks Bullock for having his back. He tells him that he's not going to stop fighting for the city -- that he's going to get Falcone, the mayor and all the dirty cops eventually. Bullock tells him to go home.

Back at Fish's club, an old woman who had been singing for her earlier approaches her at the bar. It's Fish's mother, of course.

Jim calls Barbara, who doesn't take the call, instead leaving the apartment, where she's left a note for him. He tells the answering machine that everything will be better soon.

Alvarez approaches Gordon, telling him that Selina has been brought in asking for him. He goes to see her.

Gotham Recap With Spoilers: The Mask