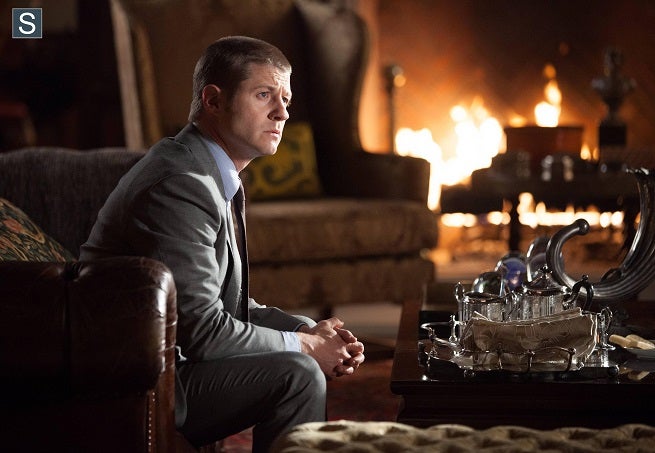 Yeah, yeah, yeah. Jim Gordon is a hero cop, Bullock is a slovenly tool of the broken system, Gotham is a corrupt wasteland, The Penguin is...Penguin...ing...what about Gordon's mustache?!

That's pretty much what the response was to the early set photos from The Mentalist producer Bruno Heller's upcoming Batman prequel Gotham, which will debut on Fox tomorrow. Directed by Judge Dredd's Danny Cannon, the Gotham pilot itself has garnered mixed-to-good reviews from critics, but nevertheless everyone seems to believe that it will be a major hit.

During a recent conference call with the press, McKenzie tackled the biggest issue of the day, and Gothamsite has the scoop:

"I had lengthy conversations with Bruno and Danny [Cannon] about everything else. Lengthy, lengthy conversations about all sorts of things. And then as soon as it hit the Internet that I was doing it, all anyone wanted to talk about was whether I'd have a mustache or not," McKenzie admits. "I thought about ringing Bruno and being like 'Uh, one last thing I forgot to…' we just literally never talked about it. And then I brought it up to him, and he goes 'No. That would look ridiculous on you.' It's twenty years before he can grow into the maturity and wisdom that it takes to sport a mustache, and that's the line we're sticking to."

There's a bit more at the link above, detailing an approach that's somewhat in keeping with the philosophy that's guided some of the more controversial creative decisions on Arrow over the last few years.

Gotham's Ben McKenzie Explains Why Gordon Doesn't Have a Mustache