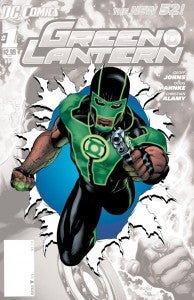 Just as it was a year ago, so is it today. Here at ComicBook.com, we wanted to take a look at DC Comics's The New 52, one year later (not to be confused with One Year Later, the event that took place following the DC Comics event called 52), to see how things look and whether these prequel stories really work as prequel stories to the 52 new #1 issues that rolled out last September (give or take, since some of these newly-released zero issues are prequels to stories that didn't come out last year). That said, we won't be trying to soak in quite as much here, so don't expect the page-long analyses of each issue that we went into with the first issues. With the relaunch, it was important to consider a number of factors. With these zero issues, we just want to see whether the zero issue is a good comic, whether it fits with the #1 and what it might say about the future of the title. Green Lantern #0 Much has been made of this title, from the "I'm not a terrorist, I'm a car thief" defense of the new main character to the cryptic epilogue featuring the two guys who have been the stars of the title up until now. Ultimately it's not  a bad issue but, like so much of what he's done lately, it just isn't worthy of Geoff Johns's Green Lantern run. The story is the kind that would have worked better in the days before every fan had the Internet and ready access to retailer solicitations, as the whole issue was an introduction to Simon Baz, a character who readers had already met through solicitation text and the fan press long before the issue ever hit the stands. There's not much else here in terms of meat for the story, other than the not-particularly-shocking revelation that Amanda Waller may be behind planting a bomb on Baz, or is at least somehow messed up in his life before the ring ever came and found him. The story is going to be accused of pandering, and that's a fair enough accusation. The fundamental problem there is that mainstream comics don't depict many Arab characters, and so when they do, the temptation is always to go straight for 9/11. When you do that, though, it reduces the character's identity to something emblematic of race or culture, rather than that of an interesting individual, and it feels like you're trying too hard to make everyone know "he's just like everybody else! Really!", which is the kind of thing that really shouldn't need to be explicitly explained. Then again, there are a lot of people who look at a character like Baz and go straight for racism as their go-to tool for "humor." You can see it on just about any social network site, and so maybe tackling the "I'm not a terrorist" plot early on, as ridiculous as that panel was, was necessary. 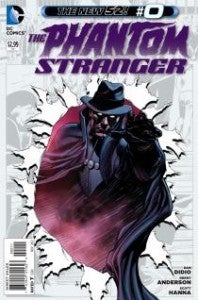 Phantom Stranger #0 Dan DiDio writes this one, and it's already taken the place of O.M.A.C. in all of his convention jokes about what his favorite DC book is, so apparently time marches on. Except that, in the case of The Phantom Stranger, his little corner of the DC Universe seems to have been rebooted for the New 52 so that he's always at least a little bit stuck in the past, with both the DC Comics Free Comic Book Day title and Phantom Stranger #0 dealing with his backstory as Judas Iscariot, the disciple who betrayed Christ in the New Testament. It's a strange choice and frankly it's too hard to tell whether it's done well. I liked O.M.A.C. a lot, and so am willing to give DiDio a benefit of the doubt that most fans will likely not, but if your character is going to be Judas Iscariot, you either have to embrace that (which the publisher clearly isn't willing to, since they never name either he or Jesus in this issue or the previous one) or do your best to shy away from specific details, leaving it in the background as a kind of clever in-joke. The latter might be the ultimate goal for the series, but it's clear they haven't reached that point yet. Maybe it's just because they needed to start with a "zero issue" but if you're going to try and be clever and coy about whether your character is ACTUALLY Judas Iscariot or just really obviously seems to be, maybe it's not best for your first issue to include a sequence where he appears to get his powers (or at least his mission statement) from Jesus' tunic. That's all background chatter, though; it's easy to get distracted in stuff like that, but what's really important is the Stranger's story. And in this case, the Stranger's story is... ...is... ...well, this issue is really the story of The Spectre, whom Phantom Stranger is kind of strangely manipulated into creating by luring a desperate, furious Jim Corrigan into what both of them thought would be a place where Corrigan could rescue his kidnapped fiancee. It all goes sideways, though, and at the end of the issue we've got a host for The Spectre, who's then whisked away to do the bidding of The Council of Wizards. It's not a bad book, but it's an incredibly bland one, and it's hard to guess what the endgame might be. So far, if I were to guess, it appears as though Phantom Stranger is being used less as a stand-alone comic book and more as an opportunity for DiDio, who is pretty famously hands-on as an editor, to engage directly with the DC Universe and force its inhabitants to do what he wants. Which isn't all that compelling a reason to read it, frankly. 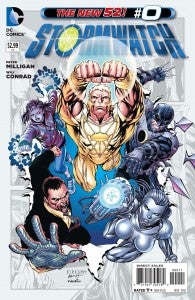 Stormwatch #0 The story that finally ties Stormwatch together with Demon Knights (officially) is here, just in time for The Phantom Stranger to appear as an immortal who's been walking the planet for centuries. What are the odds we'll see him appear in Demon Knights and/or Stormwatch sooner than later? Pretty good, I'd have to say. This issue is a masterclass in how to do something like a zero issue for a team that didn't exist until #1. Rather than taking your chances by upsetting the team dynamic of the series going back to the component parts and seeing what brought them to where they were at the outset (which could work, but is a gamble), this flashback setup is a clever way of exploring the team's history and mission statement without appearing to break up the band for a month. Meanwhile, of course, you get to see some of the rich mythology that's been hinted at throughout the book unfold on the page in front of you. You're dealing with characters from throughout history (whose destinies are, by and large, already decided) in a big, widescreen way, guided mostly by narration. It's actually a lot like Earth 2 #0 in that way, except that Stormwatch manages to make it work beautifully. 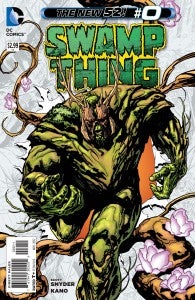 Swamp Thing #0 This one's remarkably similar to Jeff Lemire and Steve Pugh's Animal Man #0, dealing with many of the same characters and themes and also building to the upcoming crossover event The Rot. Expect to see books like Frankenstein: Agent of S.H.A.D.E. #0 playing with similar story ideas. Swamp Thing, though (in keeping with the history of the two characters and their titles) is somewhat more gruesome than is Animal Man, but the book doesn't gain much for it except a sense of credibility as a horror-superhero hybrid title, perhaps. Certainly some of the stranger imagery in the issue feels more "indie" than Snyder has been in a while, which is a welcome change of pace, but then, I'm about four issues behind on my Swamp Thing reading and might be a little off-pace with the rest of you on that score. There's also something that is, by my reading, a pretty massive retcon of Swamp Thing's origin, putting responsibility for the accident which turned Alec Holland into the monster squarely in the hands of another character. It's not a major character or anything with a lot of story implications for the future (probably), but it's major to his personal history...and Alec's ever-changing personal history has long been a major driving force in the saga of the Swamp Thing. 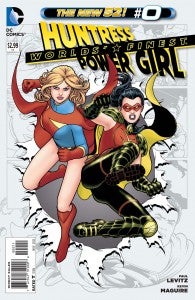 Worlds' Finest #0 I've discussed this before, in the context of John Romita, Jr., but I think it's safe to say that Kevin Maguire's art style is not particularly well-served by modern comics coloring. His clean, simple lines don't really need the advanced rendering techniques popular with today's colorists and so his best work tends to remain the older stuff. We get a lot of the feel of the older stuff in this issue, as Paul Levitz writes human, believable versions of the icons of Earth 2 and Maguire has a lot of room to shine in terms of his biggest skill: giving faces that emote. Doing so in a story that's full of big emotions makes the art really pop in this issue, even if some of it (especially in the early pages) looks a bit overwrought due to the coloring. There's a big story moment here, too, that Maguire kills but a ton of credit is due to Levitz for writing it in a way that's character-driven and emotional rather than just another crash-bang action sequence. None of it is enough to elevate this story to a point where it feels significant in the larger scope of things, though, and there's definitely something...off...about the issue in general. That may be a byproduct of my not having read Worlds' Finest yet...but as these zero issues are meant to be an entry point for new readers, it fails on that score in that this one doesn't make me want to come back for more (although if Maguire and Perez knock it out of the park like this every month, I may pick it up in collected edition).