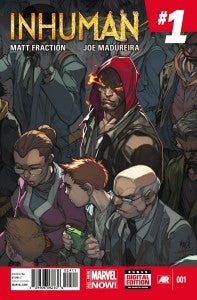 Following reports from retailers earlier in the day that orders for January's Inhuman #1 had been cancelled, someone (apparently not Marvel Comics? More on that below) confirmed for Comic Book Resources that the anticipated series from writer Matt Fraction and artist Joe Madureira would be delayed by three months, debuting instead in April.

Inhuman #2, previously solicited for February, is expected to shift until May and then hit that deadline.

No comment has come from the publisher yet as to the cause of the delay (they're closed for the Thanksgiving holiday in the U.S.), but it's difficult not to assume that it's related to Madureira. He famously took time off to spend with his family in 1999 and has hardly hit a deadline since. At one point in 2000, his creator-owned title Battle Chasers was so far bast its due dates that Wizard Magazine parodied The Blair Witch Project, doing an interview with Madureira that joked in order to find him, Wizard's staff had to camp out at his home and wait for the elusive artist to make himself known.

The artist most recently completed an arc on Savage Wolverine which had been in development for some time--reportedly since before the launch of Superior Spider-Man.

Inhuman is an ongoing series spinning out of the events of Infinity; the new Inhumanity status quo, which will see a marked increase in the number of Inhumans in the Marvel Universe, kicked off following the conclusion of Infinity today. An Inhumanity one-shot from Fraction and Olivier Coipel, is on sale December 4.