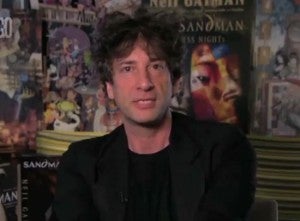 With less than a week to go before the close of voting, comics legend Neil Gaiman is currently outpacing North Korean leader Kim Jong Un in the 2013 Time 100 Poll. The poll, taken each year by Time magazine, gives readers a chance to vote for the "leaders, artists, innovators, icons and heroes" that drive worldwide culture. The current #1 is Egyptian President Mohamed Morsi, but it's a bit farther down the list that things get interesting. Coming in at #6 is Gaiman who, upon learning that he was doing so well in the poll, good-humoredly tweeted, "Say NO! to dictators and/or tanks. Say YES to scruffy British novelists." The dictator in question, North Korea's Kim Jong Un, currently resides at #9 on the list with only about 2/3 as many votes as Gaiman.