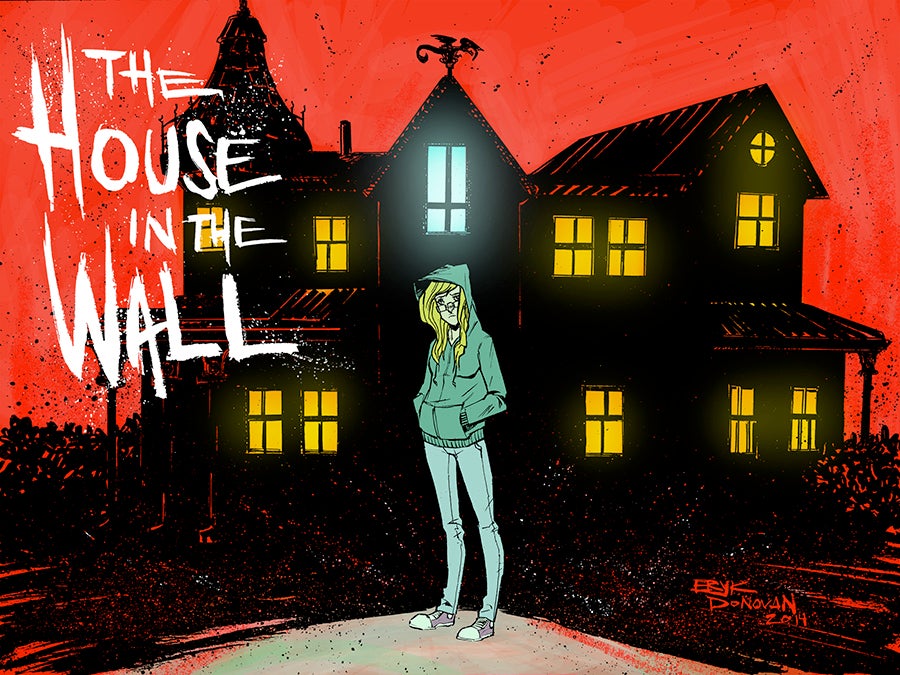 Fan-favorite Bat-writer James Tynion IV is used to creeping his readers out a bit.

When he does superheroes, it's a dude in a bat costume who lurks in the shadows; when he does a coming-of-age story, it's about aliens in The Woods.

So what happens when he does straightforward horror?

Find out today over at Thrillbent, where he's debuting The House in the Wall. The comic tells the story of Ariel Carpenter, who has been sleep-walking through life for as long as she can remember. Nothing, not her boyfriend, her job or her friends... none of it seems to bring her any closer to reality. The only thing that seems solid, seems real, is a spectral house she visits every night in her dreams. But when she discovers a door to that impossible dream house in the wall of her run-down Brooklyn apartment, she’ll unlock an ancient horror that has the potential to destroy her life forever.

The book is co-written by Tynion and Noah J. Yuenkel with art by Eryk Donovan, colors by Fred C. Stressing, and letters by Troy Peteri. Following tomorrow's launch, the limited series will be serialized exclusively on Thrillbent twice-monthly thereafter. You can visit the comic's Thrillbent home page directly here.

Tynion joined ComicBook.com to talk about the title, and his love for both horror movies and digital comics that make Thrillbent a great fit for this particular project.

Is it nice to know that you've got a soft landing here? I mean, being the first new book announced right after Empire came back means there are theoretically a bunch of new eyes on Thrillbent for the first time right now.

Do you think that Thrillbent's way of making digital comics is ideally-suited for horror books?

Absolutely. When you're writing [traditional] comics, you've really got just one chance every two pages to scare the readers -- the page turn. Here, you get that chance again every panel.

It's still comics -- you are controlling the flow [of the story] yourself but it allows for any moment to be a scare moment and that's something that I've always really liked about it.

You've got that kind of Tim Burton vibe where even when you're not doing horror, there's horror kind of creeping in around the edges of your superhero and coming of age stories. Do you think that's fair to say?

Horror is the single most-influential genre on me. I spent my senior year of college, my sr thesis was on the development of international horror cinema. I wathced 137 horror movies over the course of those two semesters. That was an incredible experience that gave me this grounding for things but also helped show me what are the areas where there's room to tell new kinds of stories and find new fears.

There's a tinge of horror in literally everything I write and I've been trying to get more straight-up horror things out there because it's a genre that's really close to my heart.

So why this story, right now?

The big thing is I've noticed there's a glut of ghost movies recently, hauntings, whether it's a ghost or a demon, but it's possession kind of stories and they're all kind of in these rural settings and use lots of the same tropes. I wanted to figure out in this format in particular if there was a way to tell a ghost story that really felt different. And that's where it all started with. I think that's the thing that will make the difference.

Nobody inherits a house and goes out into the middle of nowhere; this is a woman who lives in a crappy apartment in Bed-Stuy in Brooklyn. It's a story about feeling the disconnect of real life as you disappoint yourself and disappoint your lovers and disappoint your family over and over again -- and you latch onto dreams and the dreams start to feel more real than the reality. And that literally happens to her.

She's been building the idea of this place in her head for so long and then she discovers the door to that spectacular house in the door of her bedroom in her tiny apartment. That's where it comes from; I like impossible structures, strange creepy horror and buildings that change, living places almost. I take a lot of influence from horror manga as much as western comics and western horror. I wanted to take a lot of the pieces and the tropes and do them in ways we haven't seen before. My co-writer Noah and I have very similar taste in horror and this whole series comes from the fact that we sat down and said how can we do this in a way we haven't seen it before?

How did you come up with the look of this book, which doesn't scream "horror comic" at first glance?

We wanted it ot be very stark and modern; we didn't want to play into the classic ghost story thing. We wanted that first image to grab you in a really aggressive way with bright colors, which you'll see in the seirs and in the other covers that Erik is doing.

We wanted it to have that aggressively new feel and I think he is a phenomenal artist who is very much on the rise and you're going ot see a lot more from him. If I have my way you'lll be seeing a lot more from him and me. Our colorist Fred Stressing is absolutely nailing it too. He has almost an Argento feel with strange, great uses of bright colors and horrible situations.

...And lastly, we've got a reader question: With a name like "James Tynion IV," can you conclusively prove you're not a Game of Thrones character?

[Laughs] Every episode that comes out, I get a lot of misspelled tweets about Tyrion popping up in the feed over and over again. Thankfully for me, I do not live in that world so I am probably not going to be horribly killed at any point in the near future.