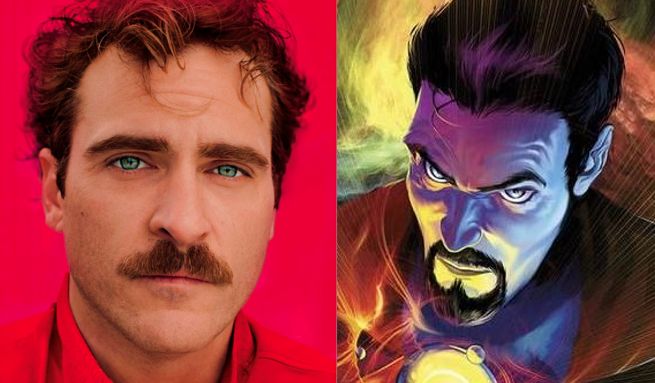 Joaquin Phoenix has been on many comic reader's minds lately. The actor was reportedly set to star as Stephen Strange in Marvel Studio's upcoming Dr. Strange film, but the deal collapsed right around New York Comic Con 2014.

Not much has been revealed about the doomed deal, and it doesn't look like Phoenix will be overly forthcoming on the details. In an interview with Playboy, Phoenix said that he couldn't discuss the broken negotiations between him and the studio. However, his following train of thought suggests that he simply wasn't interested in the character.

Said Phoenix: "I've met on all sorts of movies throughout the years. What seems appealing about some of them is the idea of pushing myself in a way that's out of my comfort zone. But really, it's what I'm always looking for—good characters, big ideas and a passionate filmmaker. If those things line up with any kind of movie, I have interest in it."

The interview also reveals that Dr. Strange wasn't Phoenix's first opportunity to portray a superhero. When asked if he ever regretted turning down a Marvel movie, Phoenix said that he actually had.

There's only one movie I regret saying no to—except the person who ended up doing it was so good and was absolutely meant to do it, so I don't have any regrets. I'm not going to say which one, but it was a really big hit. It's getting to the point where they're making some pretty decent movies. I thought Iron Man was fantastic.

The way that Phoenix immediately jumps to Iron Man is a little telling, isn't it? Still, there's no reason to write off Phoenix from any future Marvel installments. He certainly seems open to the idea. Here's to hoping that Marvel doesn't feel too burned by Phoenix's prior refusals.