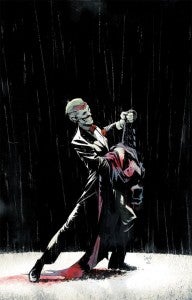 Spoilers ahead for Batman #17, the conclusion to Death of The Family.

Mark Millar, writer and co-creator of Kick-Ass for Marvel Comics and a number of creator-owned properties, most of which are or will soon be major motion pictures, has not always been kind to his former employers at DC Comics. "The actual logistics of each member of the Justice League is disastrous, and you put them all together and I think you get an excellent way of losing $200 million," he recently said of the prospect of Warner Bros.' much-anticipated (and troubled) super-team-up movie. On the other hand, he's a pretty evenhanded critic, and a Batman fan, having called The Dark Knight Rises "clobbers Avengers in terms of pure cinema" and naming Scott Snyder and Greg Capullo's Batman among his favorite comics of 2012. Well, he's chimed in on Snyder and Capullo's controversial final chapter to Death of the Family, now--tweeting earlier today that it's "amazing." Said Millar, "Just read the new Batman from Snyder and Capullo. Amazing. The perfect ending to a perfect arc." There are some fans who would disagree, as there's been some rumbling about all the lead-up to a big, game-changing death that didn't happen, but not only do we agree with Millar's assessment--it also looks as though death could be on the horizon for the Bat-family after all.