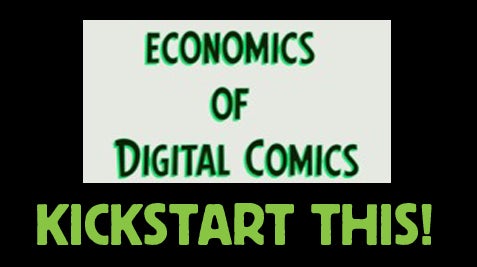 The world of comics distribution seems to change every day. Just 15 years ago if you wanted a comic book you went down to the local comic shop, looked through their selection and hoped that they didn't run out of whatever you were looking for. Now with tablets, tumblr and apps like Comixology you don't even need to leave your couch to read tens of thousands of comics. That's excellent for the reader but it leaves the creator in an odd spot: Do they go the mainstream route and try and get DC or Marvel to pick up their book - or do they just go it alone?

That's where Todd Allen's Economics of Digital Comics comes in. Todd is a journalist that has covered the e-commerce side of comics for years for Publishers Weekly and others, he's even taught eBusiness at Columbia College Chicago.

He's already met his original funding goal, but as i'm sure that we have quite a few up-and-coming creators as readers, I wanted to feature this Kickstarter as a recommended purchase. Here's the quick chapter rundown from the book

• Chapter 3: Digital Comics and Their Flavors

• Chapter 4: A Short History of Webcomics

• Chapter 5: The Economics of Webcomics

• Chapter 7: The Economics of Digital Downloads

• Chapter 8: Comparing the Economics of Digital and Print

ComicBook.com: In a couple of sentences, what can we learn from the book?

Todd Allen: It's a walk-through of the comics ecosystem emphasizing the points where an individual creator/creative team can insert themselves. The print world of the Direct Market, the more comic strip model of the webcomic and the new digital download/ebook format (like Comixology). There will be a comparison of how the money flows compared to each other. Then it's backing up to look at the alternate method of crowdfunding, both the traditional model of Kickstarter and Indiegogo, as well as Patreon, which is more of a monthly subscription variation and ripe with possibilities.

What's the biggest thing that's changed from the previous edition?

Downloads and crowdfunding. At the beginning of 2007, micropayments were not what we know them to be today. The digital download test case was the BitPass system, which just was not what anybody wanted and it did not work the way it needed to. So your digital comics were really just variations on the webcomic/comic strip school. Now we have the digital equivalents of monthly magazines and tpbs. Kickstarter and the like have let cartoonists get old work back in print and effectively let their audience commission new work. It's a very different playing field than it was 7 years ago.

Chapter 9 is called "Crowdfunding and Comics" - how has crowdfunding sites like kickstarter changed the comics publishing world?

If you have lines of communication with a large enough following or can publicize yourself, you don't really need a publisher to do a project. Jimmy Palmiotti is becoming one of the poster children for that. He'll crowdfund a graphic album, ship it to everyone who pledged to Kickstarter. Sit on a little while and then issue it to the retailers using a publisher like Image. He's covered his creative costs with Kickstarter and hopefully come out a little ahead, then he's just building up his library.

Then you've got the digital operators like Spike from Iron Circus. She was originally a webcartoonist doing Tuscon, AZ. Along comes Kickstarter and she's starting to do anthologies. Her latest Smut Peddler volume grossed $185,301 on Kickstarter and she just got an office. The nice thing about crowdfunding is that at it's most basic level, it's about connecting readers with creators. As long as the product ships, it's a very pure model and every time a campaign succeeds, it's smiles for everyone.

When color Print On Demand gets a little further along, this is only going to get more interesting.

What are your thoughts on Amazon.com buying Comixology? Good for the future of digital comics or bad?

File this one under "remains to be seen." Any conversation about Amazon needs to have a little more nuance than you usually see when the Hachette negotiation is discussed because Amazon is on of the best there is at taking care of their customer. From a customer perspective, as long as Amazon has all the digital issues, this is a good thing. You can buy your digital comics in a good format and you're not worry about them disappearing because Amazon isn't a startup that runs a risk of going out of business.

From a Comixology standpoint, it's a good landing spot. I was a little skeptical about a startup with no hardware trying to own a digital format. The Comixology format is adopted by Amazon? In that case, it's the standard format for all the Kindles and Kindle apps. I expect it to be integrated soon than later. I also believe that the comics will be integrated into the main site much like Audible has been integrated. Increased discoverability to a wider audience? That's a good thing.

Of course, if you're a publisher, you're going to have to talk out whether you want to have an exclusive with Amazon and/or for Amazon to be powering your company app(s). As anyone at Hachette will tell you, Amazon plays hardball in negotiations. I wouldn't expect any sweetheart deals to get anyone in the door and I would not be surprised to see some of the company apps go elsewhere. On the other hand, if you're a smaller publisher a 50-50 deal with Comixology + Amazon beats the functional 35% you'd get from Comixology after Apple's 30% fee on purchases through iTunes.

Dark Horse already keeps all their monthly comics on the in-house site and only releases digital trade paperbacks to the other services. Nobody is quite sure what Marvel's intentions are when they start selling current issues on their Unlimited app.

The "Tower of Babel" scenario has always been a problem for digital comics. How many different formats (thus different readers) do you need to read your normal stack of comics in digital format? The best answer is one format and that is best accomplished by an open source format, but ePub isn't quite ready for that yet. In the near future, it should be and iBooks does put some extra hooks in for fixed width display.

That's a very complicated question and we need to see how the integration goes. Don't be surprised if you see publishers reacting by spreading their distribution operations wider or pulling the monthlies in house. Cases can be made for both. It may well be situational by publisher.

Is it just for industry folk, or can up and coming creators learn from it?

If you're getting into a business, it's a good idea to understand how the money flows. A lot of management decisions make more sense if you can see where their bottom line is coming from. Digital is also an accepted way of putting out work while you're getting established.

I read through the whole Lady Sabre & The Pirates of the Ineffable Aether archive last week and was happy. There will always be a place in my heart for Goats, a strip that was probably better suited to graphic novels than strip by strip serialization.

I like some of the experimental formats. Houses of the Holy over at Madefire uses that platform to full effect. I'm very happy to see Empire return over at Thrillbent (and I'm not just saying that because Waid's involved). Also, while it's not technically a webcomic, I do read Dick Tracy online. I'm not sure bringing back Moon Maid (in a decidedly Marvel manner) is the best idea, but that strip was unreadable to me for 20 years and it finally has its groove back.

You can see the Kickstarter video for the project above.

The Kickstarter campaign runs for another two weeks.

Kickstart This: Economics of Digital Comics