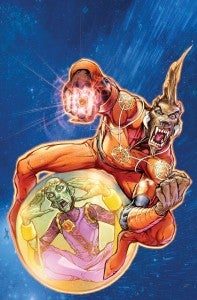 Larfleeze #1Written by Keith Giffen and J.M. DeMatteisArt by Scott KolinsGrade: A-Preview and buy it here on ComiXology

So let's get this out of the way up top: Keith Giffen and J.M. DeMatteis have, both as individual writers and during their time working together, never been as one-dimensional as fans and the comics press like to make them out to be. Everything isn't "bwa-ha-hah" all the time, and even during their funnier books they have generally managed to keep a sense of scope about the stories. That's what was key to making Justice League International and Justice League Europe a success for all that time; while in hindsight most people just remember the jokes, there was some pretty solid superhero storytelling going on...but with a bunch of jokes wrapped around it. That's what they seem to be promising again in the first issue of Larfleeze, an ongoing, monthly series dedicated to the Orange Lantern who has been effectively transformed into a living power batter (a la Hal Jordan when he was Parallax or the post-Zero Hour Alan Scott) in a new series that revolves around him and Stargrave, his butler. Stargrave, a character with a surprisingly long history, first appeared in the New 52 as part of Giffen's Threshold storyline, which set up the events of Larfleeze by seeing the avarice-driven Orange Lantern lose all of his worldly possessions--including his power battery and the life story that he had conscripted Stargrave to write documenting his exploits. It's those events which lead us to a dark place at the beginning of the issue--with Larfleeze on the brink of death and unwilling to do anything to stop it from coming. Of course, Stargrave will have to die with him, as he's Larfleeze's last "possession," and so begins the process of the butler trying to convince the Orange Lantern that he needs to re-evaluate the situation and see he's got plenty to live for. Larfleeze agrees pretty quickly, but is so caught up in recounting a version of his origin story that he nearly fails to save them. That origin story--some the same as we'd seen before the launch of the New 52 and some different, with Stargrave piping up to note the differences and challenge whether they're true or not--takes up most of the story, and gives a sense of the tragedy and randomness that put Larfleeze at the right place and time in the universe to get the power that he's wielded for all these years. It's clear that the writers are having fun with this book, and that comes through on the page. The Laurel-and-Hardy back-and-forth in this book is the kind of thing that they've done a bit recently with Booster Gold and Blue Beetle (when they were writing Booster Gold, just before the Flashpoint crossover), but here there seems to be more of a sense of enthusiasm for the undertaking. Perhaps only because it's a new pair of characters that the writers feel a bit more free to define a relationship dynamic for--who knows? In any event, the book would only work if the relationship did--and it does. Quite well. The antagonistic nature of the relationship, in fact, calls back more to the pair's wonderul BOOM! series Hero Squared than it does anything they've done for DC, where the characters generally see one another as peers, even if they don't always act like it. If you haven't read that book yet, you should. Kolins provides a great look for the series. It may not get him the kind of accolades it would if it were on a less commercial book, but his style has the feeling of something like Chris Samnee might bring to the table--that kind of mix of heart and humor, classic cartooning tropes overlaid on top of a fairly "realistic" world, inasmuch as Larfleeze can ever be realistic. It's a challenging balance he strikes--particularly in this issue where there are basically no people who look like people--but he does it well. Keith Giffen told us back when we talked about this series that he was interested in world-building, and so far that's where it looks like the series will go. Whether the wild energy of the first issue will wear off when and if Larfleeze is asked to participate in the Green Lantern "Lights Out" event is the big question; certainly so far this feels like what Larfleeze arguably should feel like: a book and a character that stands alone. Whether being integrated into the larger Green Lantern universe in a few months time will take a toll on this series is hard to tell, but something tells me that a couple of seasoned mischief-makers like Giffen and DeMatteis will find a way to participate in such an event while simultaneously thumbing their noise a bit at it and having some fun with the premise.

Larfleeze #1: No Bwa-Ha-Ha, but A Solid Book With a Few Good Laughs