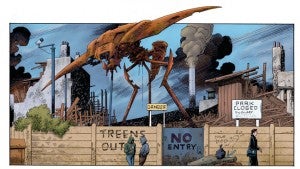 A 7" vinyl record made up of Alan Moore music, originally set to be included with copies of League of Extraordinary Gentlemen: The Black Dossier, will be made available exclusively to Gosh Comics, a comic book retailer in London owned by Knockabout, the publisher who bought the European reprint rights for The Black Dossier. That same store will feature a signing appearance by writer Alan Moore and artist Kevin O'Neill on June 23, the first day that League of Extraordinary Gentlemen: Century 2009 goes on sale. The record is free with the purchase of a Black Dossier hardcover, but can only be obtained by going into the store on the day of the signing and preordering it for a month later.