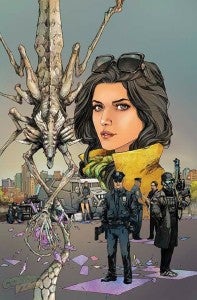 Marguerite Bennett and Emanuela Lupacchino will come together for a one-shot revolving around Lois Lane, due in stores in February 2014, DC Comics announced today. Superman: Lois Lane will be an oversized, $4.99 one-shot will bring Lois to the front page of her own comic book since her 2011 Flashpoint miniseries and her first canonical title appeareance since 1998, when Barbara Randall Kesel and Amanda Conner did a one-shot (also titled Superman: Lois Lane) as part of DC's all-female "GirlFrenzy!" event. Bennett will also be writing a Joker's Daughter one-shot for release in February, giving the pair a similarly "themed" release. The story will revolve around Lois's sister Lucy, introduced in the New 52 during Dan Jurgens's brief run on the title. Clark Kent actually had a date with Lucy--in Superman #12, released on the same day as the Justice League issue in which he embarked on his relationship with Wonder Woman. "Clark had one date with Lucy," Jurgens told ComicBook.com at the time. "We never said it meant 'exclusive,' and the WW thing had been in the works for quite a while." In the story, Lois's sister becomes embroiled in the drug trade, while her father continues to amass power in the U.S. military. "As I worked, I was very aware of the chord I wished to strike in Lois's story and world. Superman evokes a clean, bright, idealized world—perhaps an imperiled world, but one of neat, fresh color and swift, clear lines. These are elements not only in the composition of the page, but elements in the battles Superman faces—conflicts of worlds as well as conflicts of morality, between forgiveness and malice, acceptance and prejudice, right and wrong," Bennett told ComicVine. "For Lois, I had envisioned not the clean, bright, idealized superhero art of Superman, but a deep, rich, and somewhat darker human world and underworld. Not the grit and grime of Gotham, naturally, but a place of depth, texture, emotion, and consequence—a place where things must be seen with their scars, and not from high above. I think the wonderful news of having Emanuela onboard will allow us to explore the raw half of the Superman universe—the tension and fragility of a lone human woman in a world of impossible, superhuman heroism and villainy. I can't wait to see what she'll bring." A Lois Lane comic book series has been rumored and speculated about for months; whether this issue is all that DC has to offer or whether its success could mean an ongoing being announced in short order will be one of the big questions coming out of the first quarter of 2014.

Does the Guardians of the Galaxy Holiday Special Have a Post-Credits Scene?