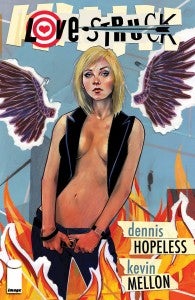 has announced a new original graphic novel by the former collaborators on the Gearhead series, writer Dennis Hopeless and artist Kevin Mellon. Lovestruck is about the manipulations of a greedy modern Cupid who has made love his business. "Love is such a powerful part of our lives and yet for so many people it's just an impossibility," said Dennis Hopeless. "We all have those friends who are talented and charming and great in every other way but just can't make relationships work. They're always in their own way. Lovestruck is about what happens when these hopelessly loveless folks are given all the powers of Cupid. But how can you control love when you don't believe in it?" "Dennis first came to me with the idea as a follow up to Gearhead and we batted it around for a while," said Kevin Mellon. "It was like a light kind of shone on me and it became something I not only wanted to do, but had to do. One of the many joys about working with Dennis is that everything we come up with together, I pretty much have to do. Come hell or high water." Lovestruck is a 192 page black and white graphic novel, which features cover art by Erik Jones. It will retail for $16.99 andwill be available in comic book stores on September 7, 2011.