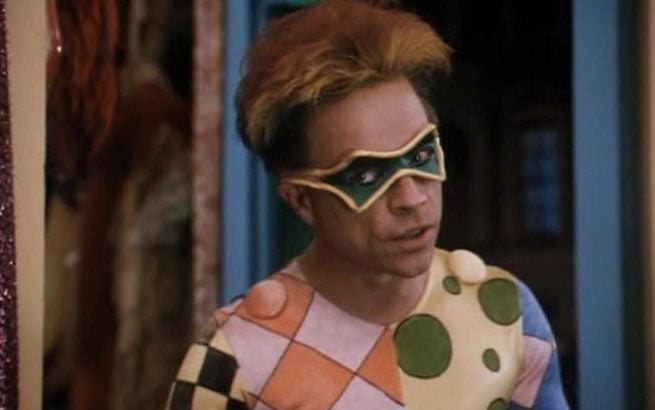 Mark Hamill will play the Trickster on The CW's The Flash series, reprising the same role he played during in the 90's Flash series on CBS.

As HitFix reported, Hamill will debut as the Trickster—a.k.a. James Jesse—on this season's 17th episode, which will fall somewhere in Spring 2015. But Hamill's new Trickster will be slightly different from the goofy prankster who teased John Wesley Shipp's Flash during the 90's series.

As the CW officially described the character:

"In this new iteration, The Trickster is an anarchist terrorist con man serving a life sentence in Iron Heights who helps Barry (Grant Gustin) and Det. West (Jesse L. Martin) to foil the city-wide attacks of a wannabe Trickster eagerly following in the original's deadly footsteps. The episode will reunite him with John Wesley Shipp who went up against him as the original 'Flash' on the CBS version."

Hamill will be the third actor to appear on both the original Flash series and the current iteration. John Wesley Shipp, who played Barry Allen and the Flash on CBS' series, currently plays Barry Allen's father. And Amanda Pays will make her Flash reunion in this week's episode, "The Man in the Yellow Suit" in a reprisal of her Dr. Tina McGee character.

"Having Mark reprise his role as The Trickster was on our original wish list when we were planning our version of The Flash," Flash Executive Producer Andrew Kreisberg told HitFix. "Christmas and Chanukah came early for us this year when he said yes! We are beyond humbled and excited to have him joining us for another round of deadly trickery!"

Hamill, of course, is also known for his iconic performance as Luke Skywalker in the original Star Wars trilogy, and will return to the role in next year's Star Wars: The Force Awakens. He was also the voice of the Joker in the DC Animated Universe and the first two "Batman: Arkham Asylum" video games.