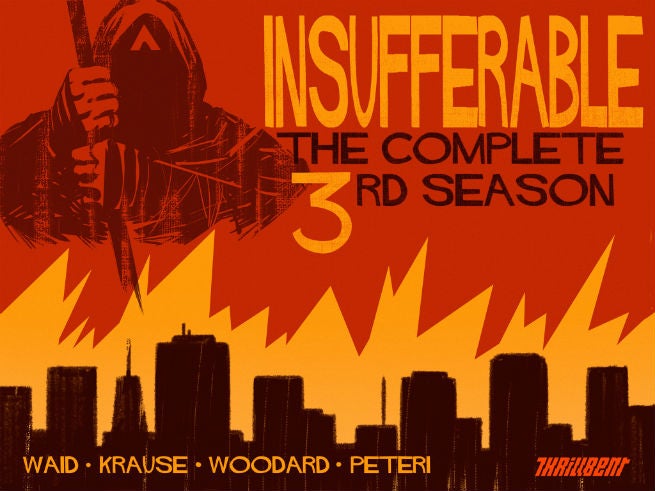 Today, Thrillbent launches the third season of Insufferable, Mark Waid and Peter Krause's superhero odd couple that served as one of the launch titles for the digital publishing platform Waid co-owns with Leverage producer and comics writer John Rogers.

Centering on a pair of former partners -- Nocturnus and his onetime sidekick Galahad -- Insufferable pairs the two in a war on crime that forces them to overcome their nearly-overwhelming disdain for one another.

Waid joined ComicBook.com to talk about the project, some of the philosophy behind Thrillbent, and comics in general. 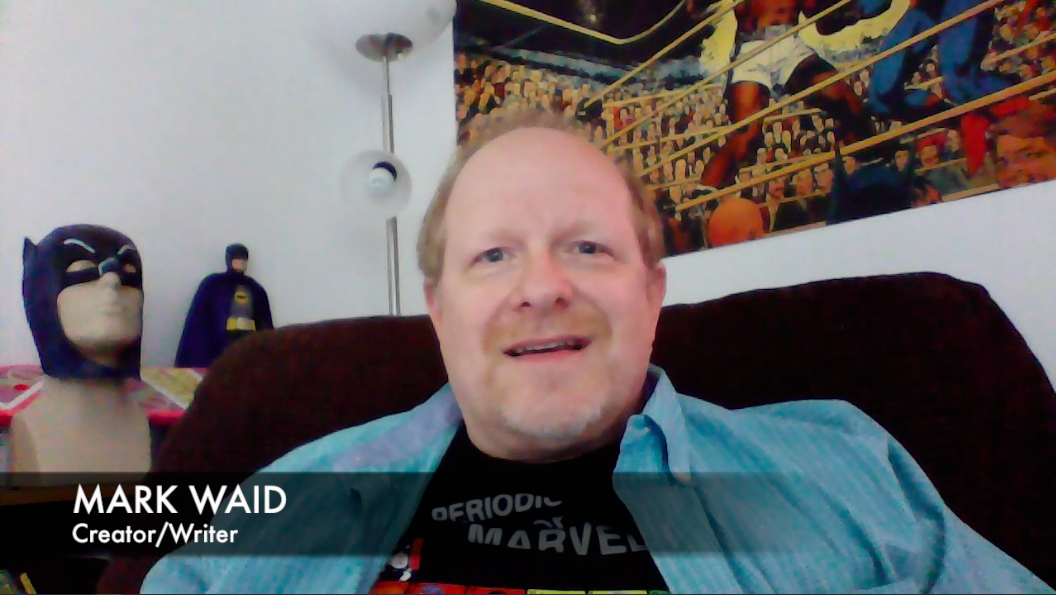 It's the start of a third volume and a continuation of this theme that you and Peter Krause have been working on for years. Is this week's Insufferable a good jumping-on point for new readers?

I pride myself in always making sure that it's a jumping-on point for people and in here we made it very clear. We certainly have laid out in the first chapter of Part Three what the stakes are and what the status quo is.

For those just joining us, Nocturnus and Galahad are thrown together, two crimefighters who hate each other, to save the city. The question is, can they fight an army of supervillains without killing each other first?

This book requires a lot of world-building, and it isn't the first time. At what point do you look at your fifth newly-created superhero universe and wonder how you're managing it without duplicating yourself?

I think the trick is that I love the material. I love the source material; I'm taking a microscope to these superhero tropes which is what these series tend to be about but it's done without cynicism, it's done with a genuine love for the material and I think because of that, I never run out of things to say about it.

You may have touched on something there: why do you think it is that most of the "examinations" of superhero tropes tend to be very dark and cynical?

Anyone can make fun of superheroes, the genre and the tropes. That's easy, that's monkey work. For me it's better to bring something that you want to say that isn't just holier-than-thou, whether it's to put these tropes in a new light or try and subvert them and do something entirely interesting and new. It's never cynical work.

Obviously, one of your best-loved examinations of the superhero is DC's Kingdom Come. What do you think, seeing those characters on the Convergence poster?

You know, I'm interested to see what they do.

It's funny, I have an emotional distance from that. I kind of wish I didn't, but I look at it from a really detached point of view. It's their sandbox, it's their toys, and I'm glad that the Kingdom Come incarnation of that stuff has left enough of a mark that people want to keep going back to it.

I feel like The Kingdom is underrated and over-bashed. It and Zero Hour both became events it was fashionable to bash, but you can see their influence in the early talk about Convergence.

Thank you. I'm still proud of [The Kingdom] and I hope that history will be kinder to it than we are now. 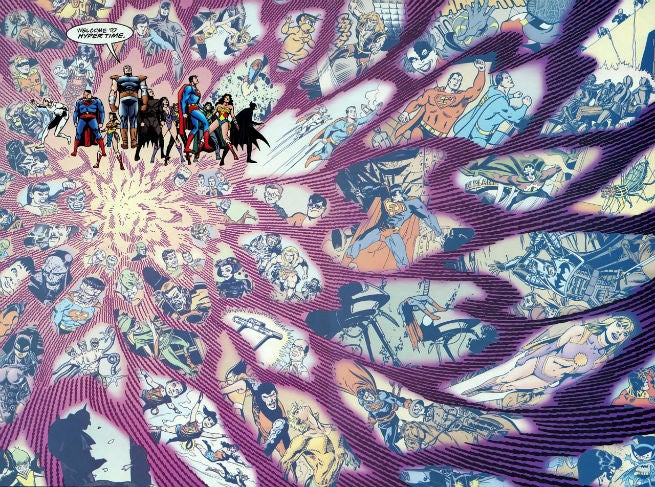 I was trying to do something and if I tried and failed with Hypertime, I'd rather have have tried and failed, than tried something easier. I do find it funny that all of the promotional art from Convergence looks like it was lifted from the last couple of pages from The Kingdom.

Back to Insufferable. I feel like this one is bigger in its kind of worldview than Incorruptible and Irredeemable. Is that fair?

That's fair to say. It actually has less to do with superhero tropes and more to do with father-son stuff, which is more universal.

When you're looking at universal truths like that, why superheroes? Is it just that your familiarity lets you work your way through the ideas better?

I think that's probably it. That's a genre that I know backward and forward. It's a genre I've clearly thought about every day of my entire life since I was four years old. That just makes it enjoyable; it feels to me like I won't ever run out of things to say about the superhero genre. I hope that somebody stops me before I embarrass myself but I don't think I'm there yet.

You guys are some of the only superheroes on Thrillbent, where the focus seems to be on other material.

Much moreso. The only reason we did superheroes on Thrillbent ot begin with is becuase it seemed like with Peter Krause and I, that's what people wanted to see. That said, I think there's room for so much more than just straight-up superhero stuff. That's one of the things I enjoy most about Thrillbent is that there's such diversity of material.

Obviously, you're now going into Season Three. Is it harder to keep visible now that you're not quite as shiny and new?

That is the hardest thing is keeping the momentum and just reminding people that we're out here. It's rewarding when it works but man, any help anybody can give us, even just a recommendation to their friends, makes everything stronger. 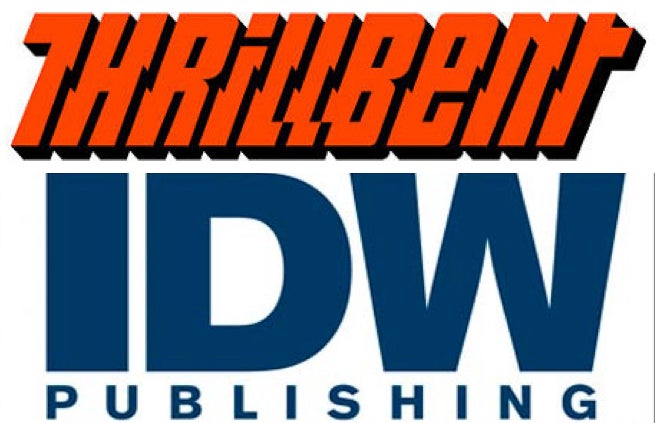 Do you think, not being a traditional publisher, that the biggest opportunities for growth are in the online market rather than traditional comics readers?

I really do think our biggest growth opportunity is taking advantage of digital as the new newsstand; the toughest thing there is that the signal to noise ratio is so huge that it's hard to be heard. I do think doing print with IDW will help enormously in reminding comics people we exist.

A lot of sales in today's market feels creator-driven. Are you guys still out there recruiting or at this point are you content to let people come to you?

A little bit of both. We're now at the stage where we're finally getting people knocking on our door. They're starting to see that it works and that there's a way to get it out there.

We're still hitting up bigger creators and trying to find a place in their schedule but it's nice to finally be in a position where some of those people are coming to us.

It seems to me that these characters are following a trend we see in a lot of your fiction: their biggest fault, and the place where they cause themselves the most trouble, is their ego. What makes you keep going back to that sort of character, be it heroes or villains?

I think that it pushes my own personal hot buttons. I personally find arrogance and egotism two of the least attractive characteristics in human nature and so I find a lot of drama out of that, if you will.

I feel like I have something to say about the place of ego in the world and the benefits and the traps that come with having a highly-developed ego. It's part of Daredevil too. He's a little full of himself a bit and I like being able to set those characters up to be taken down a peg.