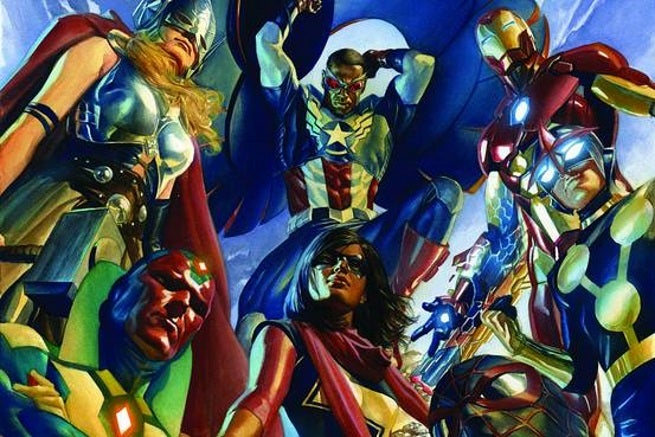 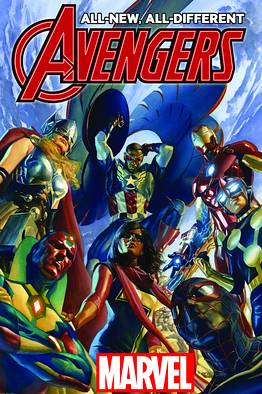 "We get to do something that hasn't been done since the beginning of the series back in 1963, which is we get to tell an origin story for the Avengers as the team rebuilds from the ground up," Waid said.

The All-New, All-Different roster is the most diverse in Avengers history.

"I like the fact that we ended up with an Avengers team with one white guy on it," Waid added.

"We got lucky by happenstance in that Thor was the way Thor was and Cap was the way Cap was," said editor Tom Brevoort. "The fact that we were so balanced that there's only one white guy is more than we would have expected when we started out. It's pretty cool."

The new Avengers team will also have a an interesting added challenge of operating on a limited budget. Tapping Tony Stark's resources, which previously had seemed endless, is not an option.

"They're poor, and they have to manage their assets," Brevoort said. "Another new wrinkle: Half the team goes to school. They've got hours of operation, and if they get stuck in Zimbabwe, somebody's going to have to write the absentee slips."

The team will defend the new Marvel Universe as Earth's Mightiest Heroes, following this summer's massive Secret Wars event. Marvel also revealed this week that Miles Morales will indeed occupy the main Marvel universe alongside the Amazing Spider-Man, with his own solo title written by Brian Michael Bendis. Iron Man, who was revealed as mainstay Tony Stark under the armor, will also receive a Bendis-penned solo book once secret Wars concludes.

While Waid, a comics industry veteran, has written comics starring individual Avengers members, this will be his first time penning Marvel's premiere team.

Are you excited to see Waid, Asrar, and Kubert take on the Earth's Mightiest Heroes? Let us know in the comments!

Via The Wall Street Journal

The Mean One Director Addresses Legality of Grinch Horror Parody