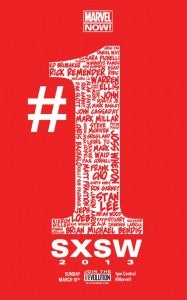 Now through March 12, over 700 Marvel #1 issues will be made available free to own digitally, Marvel Director of Communications Arune Singh just announced at South by Southwest. The issues, which presumably range from the earliest days of Marvel up through the present day and definitely includes at least the most recent Hawkeye #1 (editor Axel Alonso recommended it to the audience), is just one of five announcements Marvel is set to make during their panel today. Image Comics did something similar earlier this year, making dozens of first issues--including key relaunch issues and recent #1s--free to readers via ComiXology. While Image's program doesn't expire, Marvel's does...but fans still get to keep the issues in their library when the promotion is over.