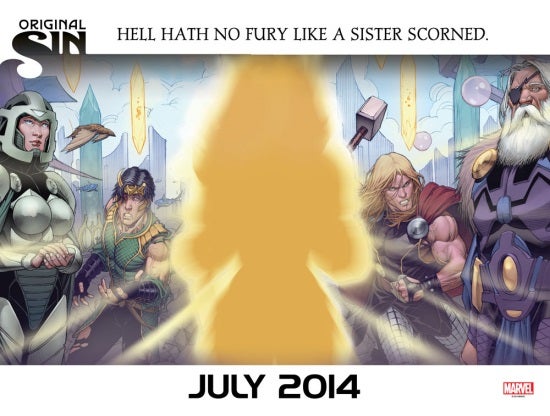 Marvel Comics has released another teaser image for Original Sin, the publisher's first crossover event of 2014. The teasers have all indicated that everybody in the Marvel Universe has an "original sin" of their own. The latest teaser casts that shadow over Thor and his adopted brother, Loki. Of course, Loki's past as a villain means he has plenty of well-known sins, but what sin does he share with his brother? Well, judging by the teaser, it seems to have to do with their sister. The teaser is different than the previous ones in that it seems to be and image of two conjoined covers, rather than a single issue's cover. As such, we should probably be hearing about a multi-part Original Sin tie-in story that will run in the pages of Thor: God of Thunder and Loki: Agent of Asgard. In Original Sin, Uatu the Watcher is murdered. The killer takes the Watcher's eye, which has gazed upon the Earth for eons. The eye has seen the secrets that the Marvel Universe has tried to keep hidden, and now those secrets are coming out. It's up to the heroes of the Marvel Universe to answer the question, "Who killed the Watcher?" Original Sin #1 ships in May.