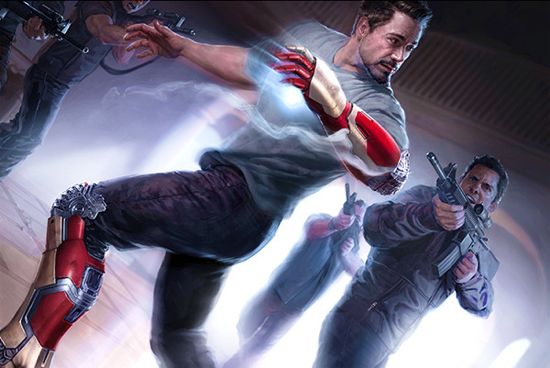 The Marvel Studios Panel at San Diego Comic-Con 2012 will take place in Hall H from 6 PM to 7 PM on Saturday, July 14, 2012. The official description of the panel doesn't give a lot of details: "Marvel Studios presents Iron Man 3. Join Producer Kevin Feige and special guests as they provide an inside look at the ever-expanding Marvel Cinematic Universe." Here are our theories on five possible announcements and events that could take place at the panel. Iron Man 3 First Trailer – Iron Man 3 has already been shooting for several weeks in Wilmington, North Carolina. There has been enough footage shot that Marvel Studios ought to be able to put together a sneak preview trailer to unveil at Comic-Con. The Iron Man 3 trailer might even give the first official look at the villains for Iron Man 3. Iron Man 3 Cast Appearance – Who are the special guests with Kevin Feige? Well, it's possible that several cast members from Iron Man 3 will be making an appearance. Who among the cast will appear? Robert Downey Jr., Guy Pearce, Ben Kingsley, Gwyneth Paltrow, and director Shane Black would all be good guesses. Guardians Of The Galaxy Movie Announcement – According to some sites, it's official that Guardians of the Galaxy will be announced as the next Marvel Studios movie to be released after Captain America 2. Of course, some of those same sites also had it official that Black Panther would be the next movie announced. It's always possible that Marvel Studios announces both, but the smart money appears to be on Guardians of the Galaxy at this time. Ant-Man Preview Footage – It's been reported that director Edgar Wright has already shot a test reel for Ant-Man. Whether Marvel Studios will share that Ant-Man test reel at Comic-Con is unknown, but since Wright is said to have finished the test reel in June, it does sort of make sense that he was probably getting it ready for Comic-Con. Avengers 2 Movie Announcement – It's probably too much to hope for at this early stage, but an official announcement in relation to at least what year Avengers 2 will be released could be possible. Most rumors have Avengers 2 being released in the summer of 2015, so it would be great if the Marvel Studios panel confirms that to be true. It would also be nice to hear a confirmation that Joss Whedon will return to direct.