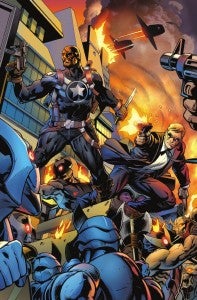 In today's issue of Battle Scars, the Marvel Comics Universe (colloquially known as the "616 Universe" to fans) will be introduced to Agent Phil Coulson. Well, actually, he's been hanging out there for a while, but nobody knew. According to a report from USA Today, the character heretofore known as "Cheese," partner to Marcus Johnson (Nick Fury's black, illegitimate son who has lost an eye to bring him more into line with the Samuel L. Jackson look of Fury in the movies), will be revealed as Coulson. The fan-favorite character, played by Clark Gregg in every Marvel movie since Iron Man, will reportedly play a central role in next week's film adaptation of The Avengers, particularly in the early scenes before everyone is working well as a team. "He's a little bit like the stage manager at Lollapalooza dealing with all these crazy rock stars," Gregg told USA Today. Marvel executive editor Tom Brevoort, who called Coulson a viewpoint character for the audience by virtue of being a regular guy adrift in a sea of superheroes, said that it was inevitable that he would eventually end up in the comics. In spite of a fandom that resists change in most cases, new characters created in other media have traditionally had something of an easier transition to acceptance in mainstream superhero comics than new or reinvented characters first encountered in the pages. Superman supporting characters Jimmy Olsen, Inspector Henderson and Chloe Sullivan have all come from other media's interpretations of the Superman mythos, and Harley Quinn made her way into the DC Universe by way of Batman: The Animated Series. "There is a great value in having new readers, people who come in after seeing the movies, and being able to pick up a comic that has the characters they recognize," the paper quoted writer Chris Yost as saying. Battle Scars #6 is on sale today. The Avengers hits theaters on May 4. Agent Coulson can be found in both, and Saturday mornings on Disney XD's Ultimate Spider-Man cartoon.