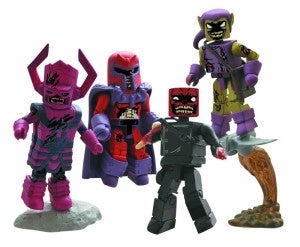 Halloween Comicfest, which Diamond Comics Distributors hopes will be the Free Comic Book Day of the fall, kicks off this year and one of the first new products intended for the event has been announced--by Diamond Select Toys. It's the Villain Zombies Box Set, part of a Marvel Zombies line of Minimates, and Diamond announced today that "it is on the way to U.S. shores!" Diamond Select Toys plans to have the set in comic shops in time to celebrate Comicfest 2013, which will happen at participating stores on October 31st. The event is asking publishers to release free or low-cost comics for consumers that retailers will pay a small price for, as they do for Free Comic Book Day; the idea is that shops will have something cooler than candy to give away at the end of the month. Visit halloweencomicfest.com to find a participating retailer near you. The set' features Green Goblin, Magneto, Galactus and Red Skull zombies packaged with various accessories including flight stands, a rock base, a Goblin Glider, Magneto''s hair, various weapons, removable guts and an alternate Zombie Norman Osborn head.