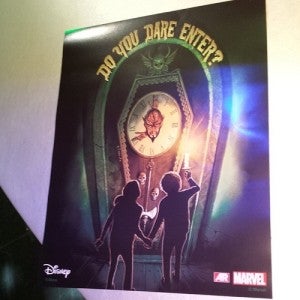 Marvel Comics and Disney's "Something Weird" hasn't come to much, after all.

Much like this weekend's rumored Star Wars announcements that turned out to be much ado about nothing, D23's announcement that the comic book publisher would team up with Disney's Imagineers--the company's creative engineers behind theme park and cruise rides, and much more--turned out to be to stay tuned for an announcement.

A poster was given out at the D23 expo, which you can see at right courtesy the tweet below. You'll notice that it's got a Marvel AR logo on it, so we gave that a try to see if there was more information to be had.

"Hello, True Believers. Are you ready to get weird? Stay tuned for more demented details on this all-new comic project from your freaky friends at Marvel and Walt Disney Imagineers," Marvel Editor Bill Rosemann says in the video that's unlocked when you view the poster through the Marvel AR App--but that's all. And, honestly, since Marvel.com let slip that it was a "comics project" before Disney did, that's not much more than we already knew.

However, between the iconography used on the poster and the Rosemann video, it bears an undeniable resemblance to something you'd see at Disney's Haunted Mansion. That lends credence to the idea that the comic could be using the title and some other elements from the Rejected Museum of the Weird movie proposal. That proposal was based on a Disneyland project by the same name that never saw the light of day, with elements of it being incorporated into The Haunted Mansion.

Photo: Ask to see something #weird at the Imagineering area at #D23Expo & get this @Marvel poster. I spill... http://t.co/yY2Y7p2if7

Marvel's Big "Something Weird" News At D23 Is No News