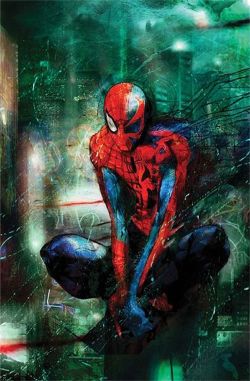 Back in the 1990's, an era full of comic book experimentation, both Marvel and DC had several ideas for increasing readership and expanding story lines of flagship characters and franchises. DC had the death of Superman, the breaking of Batman's back and the inception of its Vertigo line to expand its content and audience, especially with Vertigo. Marvel also had the rebooting of the X-Men franchise, the Onslaught events that rebooted major titles such as the Avengers and, notably, the creation of the Marvel 2099 books.

The universe of Marvel 2099 was much bleaker than the present day continuity. With heroes in this series more or less a thing of the past, its futuristic vision found some innovative ground, with titles such as Doom 2099, X-Men 2099, and, arguably the most popular, Spider-Man 2099. After some flux in Marvel's publication popularity, the 2099 titles faded away, reappearing in fits and starts over the years as specials, limited series and one-shots. Marvel has decided once again to bring back these characters, this time in the four issue limited series Timestorm 2009-2099.

The issue begins with 2099's Punisher being sent back to 2009 to send the heroes of our time into the future, namely in this issue Spider-Man and Wolverine. The Punisher makes quick work of Spidey, zapping him into the 2099 realm, all to the delight of Alchemax Industries guru, Chief Executive Stone. You may remember Alchemax as the conglomerate of the original series. The original Spider-Man 2099, Miguel O'Hara, also pops up here, heading out to a beyond Thunderdome like arena where he and some friends are off to see bloodthirsty fighting where someone, named "the Torch", will be competing. Indeed it is the Human Torch, a "power", as he's called, since people with powers, as noted earlier, no longer, technically, exist.

Wolverine, our version, finds himself to be the next zapee, and soon he wakes up to find himself face to face with what appears to be a version of the 2099 Hulk, and not just one of them. It would be an understatement to say the green giants were anything BUT jolly. In another surprising twist, one of the original 2099 X-Men, Cerebra, finds herself sharing a cell with Peter Parker, still stunned and weak from his trip to the future.

It's unclear what exactly the intentions of Chief Executive Stone are, but the limited series has some interesting potential, especially with the battles between characters that could be had. There were only a couple of instances of these futuristic figures meeting their, then 20th century counterparts, making these meetings, such as Wolverine now in the 2099 era, very intriguing.

The writing in issue one is mostly expository, simply setting us up for what is certainly to come. What will be altered, for a short time (perhaps?) when histories begin to merge and blend? It's an intriguing concept, and it's a bit nostalgic for those who started reading comics in the early '90s to see these characters reappear. The art, by penciler Eric Battle, is a nice complement to Brian Reed's writing. It will be intriguing to see if this limited series branches out beyond four issues, as the potential for intricate plot lines and story arcs is certainly there. Will popularity potentially revive aspects of this franchise? As cryptic as a magic 8 ball, the outcome is not certain, but issue one holds plenty of potential for a great series to launch us into the summer events.