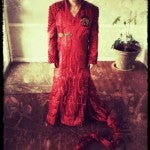 Comedian Eddie Izzard and actress Charity Wakefield, who will play Grandpa Munster and Marilyn Munster in the forthcoming NBC series Mockingbird Lane, the Bryan Fuller/Bryan Singer-created update of The Munsters, have given fans a first look at their characters by posting photos of themselves in wardrobe online today. You can check the images out below; it's unclear whether or not there will be makeup to make Izzard look morel like you 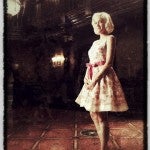 would expect Grandpa Munster to look, although it seems likely. That said, the sari or robe that he's wearing feels more like an Eddie Izzard thing than anything you'd expect from Grandpa. Wakefield, meanwhile, looks almost exactly like what you'd expect from Marilyn. Mockingbird Lane will debut in the fall on NBC.