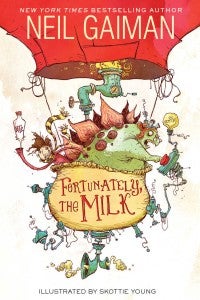 Most comic book fans probably know Skottie Young best for his seemingly never-ending parade of adorable Marvel Babies-style variant covers, but today Neil Gaiman provided fans with a look at Fortunately, The Milk, the book on which he's collaborating with Young. Gaiman didn't give much in the way of details, except to share the image at right with the following description:

This is the cover of the American Edition of FORTUNATELY, THE MILK, which is being illustrated as we speak by Mr Skottie Young, and will be published in September. It is the silliest book I have ever written, and is quite funny also.

He also noted that the cover art was debuting on his blog before Amazon or Barnes & Noble have it up on their entries for the book.

Neil Gaiman Unveils His Next Book Cover, By Skottie Young

Hellboy and the B.P.R.D.: Night of the Cyclops #1 Review: A Perfect One-Shot for the Hellboy Franchise

Land of the Lustrous to Resume Soon After Extended Hiatus