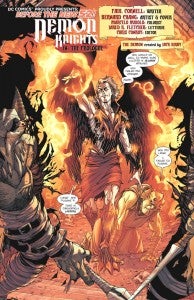 First Judas Iscariot, now Satan appears in a DC Comics title. Is DC baiting religious people? In all seriousness, Lucifer Morningstar, best known as the devil but also well-remembered by comics fans as the star of the Vertigo series Lucifer by Mike Carey and one of Neil Gaiman's Sandman supporting players, will appear in Demon Knights #0, out next week from DC. Newsarama has the full preview of the upcoming issue, although the money shot of Lucifer himself, dominating the Demon Etrigan, is at left. Gaiman himself will be returning to The Sandman for a final story next year, along with artist J.H. Williams fresh off a critically-acclaimed run on Batwoman for the New 52. That was announced at the San Diego Comic-Con International in July, but back in June ComicBook.com reported that a character from Gaiman's previously non-DC Universe Sandman series would appear in Justice League Dark. "When I finished writing The Sandman, there was one tale still untold," Gaiman said in July. "The story of what had happened to Morpheus to allow him to be so easily captured in The Sandman #1, and why he was returned from far away, exhausted beyond imagining, and dressed for war. It was a story that we discussed telling for Sandman's 20th anniversary… but the time got away from us. And now, with Sandman's 25th anniversary year coming up, I'm delighted, and nervous, that that story is finally going to be told." Lucifer is, of course, only one of a number of iterations of The Devil to appear in the DC Universe, and while he's generally appeared in a suit and in an appearance inspired by Milton, this New 52 appearance seems to be kind of a hybrid of the Gaiman look and the armored look of Neron, one of the other DC versions of the devil, who appeared in the story Underworld Unleashed before becoming a recurring DC villain, making his most recent notable appearance in 52. In all likelihood, that character won't appear anytime soon in a New 52 book, so time will tell whether he even exists anymore or whether he'll be folded into this version of Lucifer.