Just over six months after Barnes & Noble and DC Entertainment fell out very publicly over DC's decision to back Amazon's Kindle Fire tablet with a hundred DC graphic novels that were available exclusively through Amazon's digital storefront, the two have announced a partnership that will bring dozens of DC titles to Barnes & Noble's Nook Color and Nook Tablet devices. The shift reflects that DC has a similar philosophy to Marvel, who brought their material first to the Nook but did not embrace an exclusivity deal, saying that Nook was the first but not only format they were interested in exploring. At the time, a number of sources suggested that the window for digital exclusivity was only about three months long, which would have seen it end in late February or March. "Our goal is to reach the broadest possible audience and this new partnership with Barnes & Noble brings Batman, Superman and many other iconic DC Comics and Vertigo characters to the millions of NOOK Tablet and NOOK Color readers," said Jim Lee, co-publisher of DC Entertainment, who famously teased Superman: Earth One on the Kindle Fire in a PR event for Amazon shortly before the device was on the market. "The new Zoom View feature makes our comics even easier to read, and emphasizes the graphic and artistic storytelling that is paramount to our art form." That feature, according to Barnes & Noble, is a new one created for Nook Comics. It sounds like it's very similar to the Guided View technology employed by ComiXology, and it requires an update for Nook users before comics that use the feature will be compatible with the Nook Color and Nook Tablet readers. The update is available already at the Nook Support site, and will start to roll out "over the air," meaning that it will require no action by the user, tomorrow. As with Marvel's e-comics, the black-and-white Nook readers will not be compatible with DC's books. Although they do play comics by smaller publishers who sell in PDF or EPUB formats, that content must be side-loaded from a computer download. Android tablets that support the Nook app will also be supported although, like previous Nook Comics for Marvel and other publishers, it appears at first glance as though Nook's iPhone and iPad apps will not. 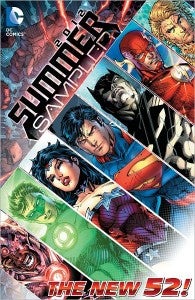 In addition to fan- and critical favorites, it seems pretty clear that DC is focused on pushing brands that have direct ties to their summer movie and publishing initiatives (The Dark Knight Rises and Before Watchmen, respectively). Posts by Barnes & Noble and DC Comics identify the content offered for Nook as encompassing mostly New 52 collected editions, but also including some popular Vertigo titles and best-selling DC books like Watchmen that were previously part of the Kindle-exclusive deal. Titles like Blackest Night and Batman vs. Bane will also be offered on the format. "Barnes & Noble is committed to offering NOOK customers a wide selection of digital graphic novels, and we're excited to offer DC Entertainment's fan-favorite collections on NOOK," said Jim Hilt, Vice President, eBooks for Barnes & Noble, in a statement. "The new Zoom View feature makes the reading experience even more interactive, and takes these graphic novels to a whole new level of entertainment." Rumors had recentliy begun to circulate that Barnes & Noble had come to an agreement with DC, as The Dark Knight Rises merchandise started to dominate display tables at their retail stores and the graphic novels which had previously been removed from the shelves following DC's decision to go Amazon-exclusive with their digital content As an incentive for readers to try DC Comics on the Nook, Barnes & Noble is currently offering DC Comics: The New 52 Summer Sampler, which is nominally a preview of five graphic novels but which isn't the typical five-page preview comic book readers are used to. For $1.99, it's the first issues of Justice League, Justice League International, Catwoman, Batman and Animal Man. The "list price" for the ebook is actually $7.99, meaning that once the introductory offer is up, the sampler will cost slightly more than buying the individual #1 issues on ComiXology, where all of the New 52 #1 issues are routinely offered for 99 cents each. All five of the "sampler" titles were made available during May, as part of the first month of releases for DC's New 52 collected editions.