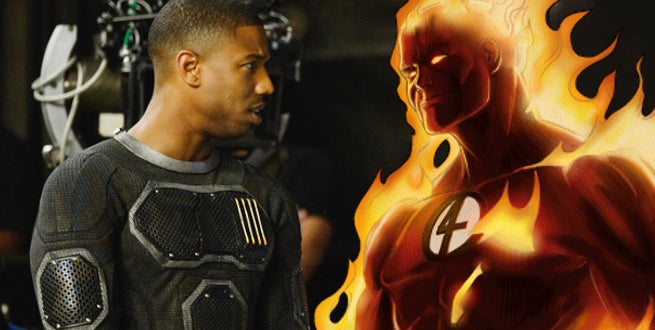 While somebody have speculated that official images haven't been released until now because the film was a "mess," but Trank says that's not the case. They feel like they have to careful about what they release because their film doesn't have an established look and feel like The Avengers or X-Men films do. "But this movie, we really want the audience to have the proper reaction to this material seeing it for the first time," Trank said. "You've really got to put your best foot forward.  You can't just leak an image to strike up a conversation.  You want people to see something that has thought behind it.  And the teaser should do just that.

David Cronenberg's science-fiction horror films, The Fly and Scanners, were big influences on Trank's Fantastic Four. "I'm a huge David Cronenberg fan, and I always viewed Fantastic Four and the kind of weirdness that happens to these characters and how they're transformed to really fall in line more with a Cronenberg-ian science fiction tale of something horrible happening to your body and [it] transforming out of control," Trank explained. "And the potential for a hard sci-fi take on that material makes me really excited.  I don't really see that kind of potential and that kind of take being implemented on any of the other superhero movies that seem to be coming out in the next few years."

Miles Teller ("Whiplash") and Michael B. Jordan ("Chronicle") were Trank's first choices for Reed Richards and Johnny Storm. "I had just come off working with Michael B. Jordan and his character, Steve, in Chronicle had a lot of similar characteristics to Johnny Storm," Trank said. "And I thought it would be interesting to take the family dynamic of the Storms, which is brother and sister, and bring that more into the 21st century in terms of what we consider the norm.  I have mixed family in my own family and it's something that isn't out of the ordinary anymore but we don't really see it portrayed in the casual reality of the movies.  That's something I felt that would be interesting and challenging, to have mixed siblings."

He said Jamie Bell ("Billy Elliot") was perfect for Ben Grimm because he exudes "A kid who comes from a rough neighborhood and is an alienated kid and has this toughness to him," which is what Trank need for the role.

"I think The Ultimates is probably our biggest influence because it's the younger Fantastic Four," Kinberg said when asked which comics influenced the film. "And a lot of the science specifics are there.  And a lot of the means of transformation we took from those books."

American composer Philip Glass ("The Truman Show") will be scoring the film with Marco Beltrami ("The Wolverine"). "Philip Glass is one of my heroes," Trank gushed. "Whenever I'm writing or drawing I always put on Philip Glass.  This is my first time making a movie with a score and I thought, "why not give it a shot?"  So I asked the studio, "what about Philip Glass? Would you guys be okay with me giving him a call?"  And they were totally cool." Glass watched Trank's Chronicle and then spoke with Trank about he film's philosophical message. Trank and Glass have been working together on the score for a year.