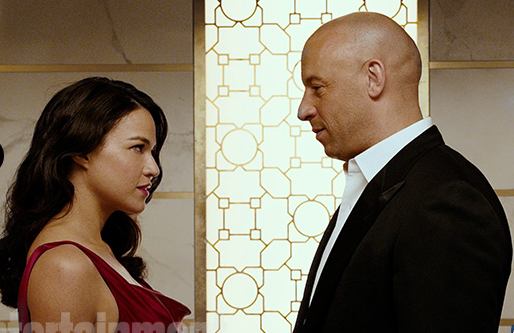 In the photo, Diesel’s Dominic Toretto and Rodriguez’s Letty Ortiz share a tense scene together. It will be one of the film’s many intense moments, as Jason Statham’s Deckard Shaw, who blames Rodriguez for his brother's death, comes to deliver vengeance.

Diesel, who is also producing the latest installment in the franchise, days that this may be the darkest Furious film yet.

“Our characters are going into a shadow world beyond what they could have ever imagined,” Diesel told Entertainment Weekly, who also debuted the image.

Furious 7, directed by James Wan, also stars Dwyane “The Rock” Johnson, Kurt Russell, and Paul Walker. Walker will have a brief posthumous role before his character retires from the franchise. It hits theaters on April 3rd, 2015.