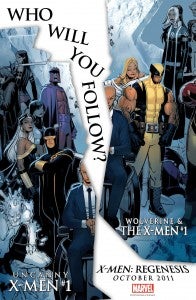 As we reported here recently, Marvel is ending its long-running series Uncanny X-Men as a result of its upcoming storyline "Schism", which sees the X-Men divided, with long-time and iconic members Wolverine and Cyclops squaring off against each other. Fear not, gentle readers! Marvel announced today that coming on the heels of the end of Uncanny X-Men, two new X-titles will be released! The two new titles will reflect the aftermath of the Schism event, as "ReGenesis" begins! The big question of "who will you follow" gets answered first in the pages of Wolverine and the X-Men, with Chris Bachalo and Jason Aaron taking the creative helm for this series. That occurs in October, but wait for November! That month sees the release of, wait for it, Uncanny-X-Men! Carlos Pacheco, Greg Land and Kieron Gillen take the artistic and story duties for that series, which focuses on the group of mutants following a different path. "Years of X-Men history have been leading to this. X-Men: ReGenesis will affect our entire line leading up to a major conflict coming up in 2012!" said Marvel Editor in Chief, Axel Alonso. "This is just the start of what we have planned for the X-Men. Next summer all eyes will be on mutantkind – we guarantee it!" So who will YOU choose? Which title will you follow, or will you follow both! Stay tuned as Schism kicks into high gear this summer!