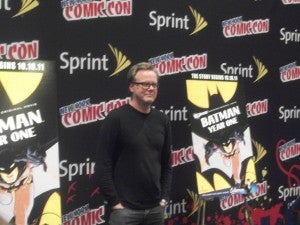 At last weekend's New York Comic Con, we got a chance not only to speak to voice director Andrea Romano, but also to legendary Warner Brothers animator Bruce Timm, an executive producer on the just-released Batman: Year One DVD and Blu-Ray. Timm is the co-creator (with Paul Dini) of what fans call the DC Animated Universe, comprised of Batman: The Animated Series, Static Shock, Justice League Unlimited and much more. To the extent that DC competes with Marvel for recognition in film, that's largely Timm. And the way DC manhandles just about everyone in terms of creating enjoyable animated fare? That's Timm as well. Based on the graphic novel by Frank Miller (who later brought the world Sin City and 300) and artist David Mazzuchelli, the film takes a very street-level view of Bruce Wayne's early career as Batman, and that feel had to be reflected not just in the story but in the animation, according to Timm. "This one is really unique in that when I think of Batman Year One, I think of it as being almost like a live-action version of Batman, but super-seriously realistic--low key. There's almost no larger than life element in this movie. It's Batman versus corrupt policemen and corrupt criminals and corrupt government officials. It's not about Jokers and Mr. Freeze and any of that really larger-than-life stuff," Timm explained, then added, "I mean—there's not even a Batmobile in it!" As with the graphic novel, the look of the film reflects that philosophy as well, with a subdued color palette and figurework that harkens back to the Fleischer Superman cartoons. "To me that's the thing that's the overriding principle to every aspect of the production," Timm said of that kind of realism. "We wanted to keep all the performances really naturalistic and really believable. In a lot of our other productions, we have a lot more leeway and we can go more over-the-top with the villains or even sometimes with the heroes but here it's all about maintaining an even strain." He added that the philosophy extended past the voice acting into the visual style, the staging and the music; Timm said that when he sat down with composer Chris Drake, he didn't want the music to sound like a Batman movie, and that he instructed Drake specifically to avoid riffing on the various well-known scores to the Hollywood films. Timm's directive was, "It should sound like a cop movie." Of course, there was already an episode of Batman: The Animated Series that featured a Frank Miller-esque Batman briefly, but that's a very different vision of the Bat than we see in Batman: Year One. "Each piece is 100% true to itself. To this day I'm still amazed that both of those two awesome comics came out of the same guy because they're like night and day," Timm said of Batman: Year One and The Dark Knight Returns. "Dark Knight [Returns] is like opera, and Batman Year One is like jazz." He added that The Dark Knight Returns (which has been announced as a feature they're making in the near future) plays everything so big and over-the-top that it allows for a bit of self-parody and that even the original comics contain some comedic elements along with their central narrative. That's pretty common to Miller (as evidenced when Tim Burton cited The Dark Knight Returns as the inspiration for his bombastic, gothic and campy 1989 Batman film), but largely absent from the Scorcese-esque gritty realism of Batman: Year One. Timm said that it was really fun to go from the gritty and low-key feel of this film and move onto the over-the-top and operatic feel of The Dark Knight Returns. Batman Year One is available via Video-On-Demand services as well as on DVD and Blu-Ray now. Timm and company's next feature film is Justice League: Doom, based on the popular JLA: Tower of Babel story. The trailer for that film is below, courtesy Film Is Now. Justice League: Doom trailer