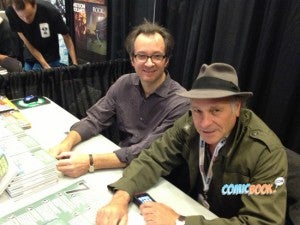 reg Palast and political cartooning icon Ted Rall, who have worked together on the 2008 comic Steal Back Your Vote and on this year's book/graphic novel hybrid Billionaires and Ballot Bandits/Tales From the Crypt of Democracy (for which I was an editor), joined ComicBook.com last weekend at the New York Comic Con. During their only convention appearance of the weekend--and Palast's first time inside of a comic book convention--the pair engaged with dozens of convention-goers, some of whom were fans of their work and many of whom were encountering it for the first time. During a siging appearance at our table, the New York Times-bestselling team discussed the convention experience, the working experience and what readers can do to take on political operatives from both sides of the aisle who are set on denying the vote to those with whom they disagree. We'll start with Greg, because...well, Greg, this is your first-ever comic book convention. How are you coping with the press of insanity the minute you walk in the door here? Greg Palast: I f---ing love it! I think it's f---ing wonderful. I mean, here...comic books come to life. I just totally think it's amazing. I think that we ought to have a comic day in New York where everyone whether they're inside or outside has to wear the costumes and do the whole thing. I think it's great. 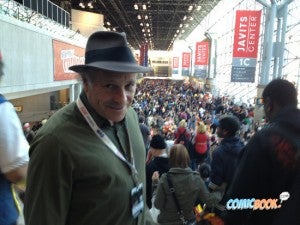 Well, there was Amazing Spider-Man Week this year, but I think that was Sony's thing.  GP: Yeah, I don't want to sell for some corporation. It's recreational, right? Ted, you've got a couple of things going on right now--you're here with Billionaires and Ballot Bandits, and you've got another book that 7 Stories was selling too. You've been to all sorts of these conventions, but what do you think is the kind of con that's best-suited to this kind of work? Ted Rall: Without a doubt, it's the smaller, independent ones like the Small Press Expo in Bethesda--or I think it's in Rockville, Maryland now. To a lesser extent there's APE--Alternative Press Expo in San Francisco. But with small press, MoCCA in New York used to be a very good one for political work, but definitely Small Press Expo is the bomb. It's all Washington political junkies mixed with indie comics fans. I go there--my wrist is more sore than if I'm doing something that I usually do. GP: Drawing, of course. TR: Oh, yeah, that's what I meant. It's weird, though, because if you get too small it's all guys who want to come and buy old issues of Batman. 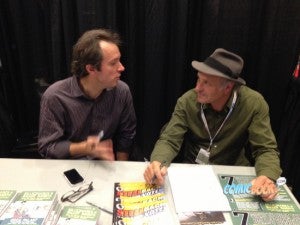 TR: Yeah, but the thing is, the biggest conventions like San Diego Comic Con and this one are really mostly about gaming and superheroes. Stuff like--I mean, there are definitely people here who are interested in what we do but it's sort of like you're catching crumbs off the table of Marvel and DC. And, Greg, you're not used to that because you're a best-selling writer and you're pretty used to commanding the room. GP: Yeah, I'm used to people coming up to me and women leaving me their phone numbers and here, it's like--all these people! But it's nice because you'll be talking about election fraud and Spider-Woman suddenly shows up and says, "What's this?" So you're getting a whole new crowd, if not a different species! Which I really enjoy, as opposed to constantly speaking to people who already know me, and want to have my babies. And once people start reading your stuff, they stick with you, so the idea of opening up to a new audience is really essential for somebody who's got an audience dynamic like that. GP: I try to make my stuff addictive--in fact if you sniff the pages you'll find out why--but the same with Rall. Rall is like salty potato chips--you just keep going and the only cure is several beers, and to pass out. You guys have the show today, but other than that are you still touring in support of the books? GP: Well, actually, my other book which came out in paperback this week, Vultures' Picnic, that's going to be turned into a graphic novel by Darick Robertson, but we have to both find spaces in our schedule. I just had to kind of go sideways and Ted and I decided to save the planet. In a way, even though we have the least interesting costumes here, we're making our attempt to actually be superheroes by trying to save this republic from death.