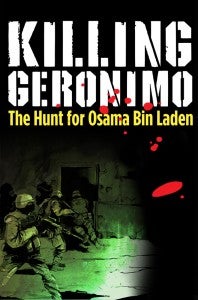 Coming out of the weekend's New York Comic Con is the news that Bluewater Productions, the company that produces numerous short biographical comic books that tend to be sold outside the direct market and generate a lot of mainstream media buzz, has been contracted by publishing giant Simon & Schuster to produce a graphic novel based on Seal Team 6, the unit that killed Osama bin Laden. Killing Geronimo: The Hunt For Osama bin Laden will be written by Jerome Maida and Darren G. Davis, with art by James Boulton. The project was sold to Simon & Schuster subsidiary Gallery Books. "Bin Laden is not a cartoon villain and this book is not a garden variety comic. And the book's heroes don't have super powers, but are courageous and well-trained men of the Navy's SEAL Team Six," Darren G. Davis, who co-wrote the book and acts as Bluewater's president, said in a press release. "Just because we chose an illustrated medium to tell this complex story, doesn't mean it is treated lightly or gratuitously." His co-writer, Jeroma Maida, called the story "a true-to-life Jason Bourne novel. And like those Ludlum books, it's a complex labyrinth of intrigue, danger and politics culminating in an action-packed ending." The comic is scheduled for a spring 2012 release.