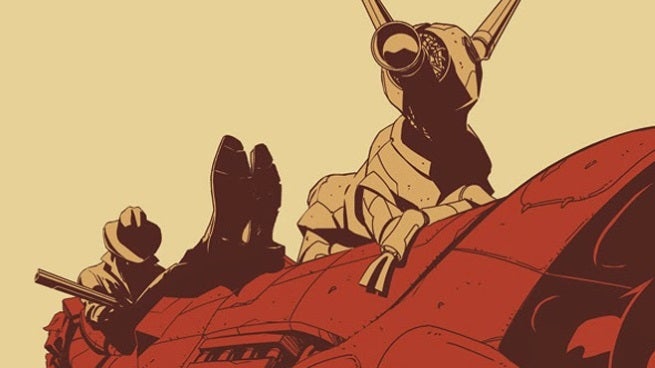 For more than a year, Image Comics' sensational sci-fi/western series East of West has kept fans captivated in its genre-bending world of bounty hunters, political intrigue, and apocalyptic prophecy, earning it an Eisner Award nomination for Best Continuing Series

Part of the series' appeal comes from the work of writer Jonathan Hickman, but at least as much credit belongs artist Nick Dragotta, whose imaginative designs and sequential storytelling in East of West earned him a nomination for Best Penciller/Inker.

On top of that, Dragotta's also just released a young readers' instructional graphic novel titled Howtoons, with more installments on the way.

Despite all of this, the busy and talented artists took a few minutes to talk to us after a signing at Comic-Con International: San Diego. Here's what he had to say.

You were nominated for an Eisner for Bester Penciller/Inker, and East of West itself was nominate for Best Continuing Series. When you and Jonathan Hickman were putting the series together, did you have any idea that it would be as well received as it has been?

No, I had no idea what to expect. Jonathan and I had just come off doing a run at Marvel, from FF, and the only thing we really had to go on was what he was doing on The Manhattan Projects. We were happy just to do those numbers. It did better than that, and it's continued to stay consistent in sales, and I think support of the book has grown. I mean, I'm elated with how well its doing, but I had no idea what to expect.

Also, just going and doing and Image book, I kind of grew as an artist just doing a creator-owned, because I kind of just draw what I want, within the confines of Jonathan's scripts. That's been a nice learning experience.

One of the things that readers love about East of West is the world building. How does that creative process work? Does all come from the script, or do you sometimes start with a drawing or design and see if Jonathan Hickman can find a place for it?

We work pretty much Marvel style, the majority of the time. Sometimes I get a full script. Like issue #12 was all around a table, so he was like, "You're going to get a full script for this, because I know exactly what I want to say in this issue." When there's more of an action-oriented issue, he just writes an outline, and I can go from that.

I prefer to do the visual storytelling. What's really nice is that I have that room to play. If I want to expand and, rather than devoting just one panel to establishing a scene, I can make that a splash page, or I can have four panels looking around the city, and things like that. You're given that freedom to expand the world.

The comics I like, they really set up the world, and you believe the place the characters are running around in. That was really important to me, to have that in this book. I love that aspect of it. 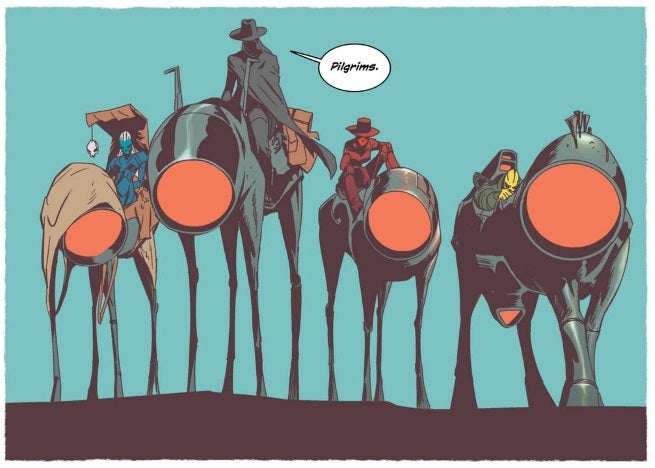 East of West has some pretty impressive character designs. Is there any one you're particularly proud of?

I like the kids. The four horsemen in kid form. Jonathan was very specific about Death and Wolf and Crow. He wanted those monochromatic characters. He had a reason for that. The kids were just straight out of Dune. I wanted to go for that Harkonnen look, and they're just going to wear heavy leather. Ranger and his is fun to draw. It's what I said earlier; I'm getting to draw what I want and bring in influences that I like, and try to learn from that and grow, and it all kind of goes through my filter. That's where that comes from. I'm just having fun doing it, and I think that shows.

My understanding is that Hickman's narrative with Nick Pitarra on The Manhattan Projects is pretty lose. Comparatively, how far ahead to do you have East of West mapped out?

It's not as off the cuff as, maybe, The Manhattan Projects. I always get a loose, Marvel-style script with page breakdowns, or scene breakdowns, really. But I have complete and total freedom to do whatever I want within that. What I like to do is ramp up whatever kind of drama he's going for, or just try to create some beats, or give him notes, maybe. He might write a sentence of dialog, within that Marvel style, and say, "We're going to have Death say this, and this is the attitude we want." And I want to make sure about that beat. Then he goes in and scripts it so that he can write to the pictures.

If you read manga and that sort of decompressed storytelling, it's usually one word balloon per panel. And those are the kind of comics that I like. Not where you're having four word balloons per panel, and that happens with us to, but if I have the time I like to try expand and smooth out the storytelling and try to create those beats.

But the scripts are not as willy-nilly as The Manhattan Projects. Like I said, sometimes it's completely full script, with panel descriptions and everything. But in terms of design, expanding storytelling, contracting it, that's all me. But from Jonathan, there's an outline and some confines that I want to stay within, and note stray from outside of his story. We want to get from point A to point B, and I can take all these different turns and stuff, but I always have to take it back to point B.

So what I'm hearing is that you do all the heavy lifting?

No, no. He goes back in and has to script it. When I write and draw my own stuff, I find that's really difficult to do. Believable scripting? I think his scripting is on point. Especially this sci-fi western thing. He writes believable dialog to me. I buy it. This sounds like these bad asses, and I'm buying it, and it works. He's laying the tracks.

East of West seems to blend a lot of different styles and genres together. Was there anywhere in particular that you looked for inspiration on how to pull that off?

I just take all the comics, from all different genres. I love all different types of manga. I love a lot European comics, a lot of South American artists, from Juan Giménez, to Moebius, and artist in Japan. I like to look at this stuff and get inspired, and then usually the deadline hits and you just got to crank. So all that stuff gets filtered subconsciously, and comes out onto the page as something new and different. I get really jazzed by comics, new and old, and I use a lot of that stuff. I wouldn't even deny it, because it's just the truth.

East of West, I wanted it to feel like a western. I love Sergio Leone films, and I love that kind of attitude, so I look at those and just try to get that gesture. I want to bring that to the comics, and always make it feel like a western, but, within that, draw whatever I want.

"All of the comics" is a pretty great answer.

And they are! I mean, everything! I've got old comics that I just see stuff in, and I'm like "wow," and it's really cool. I think it's how you fuel your imagination, you just have to soak everything in. Beyond comics to, from movies, to just books I read, museums. I have kids now too, so I look at how stoked they get on things and I want to tap into like, man, he's so excited about that, what is it about that that he likes, and try to work into your work somehow. 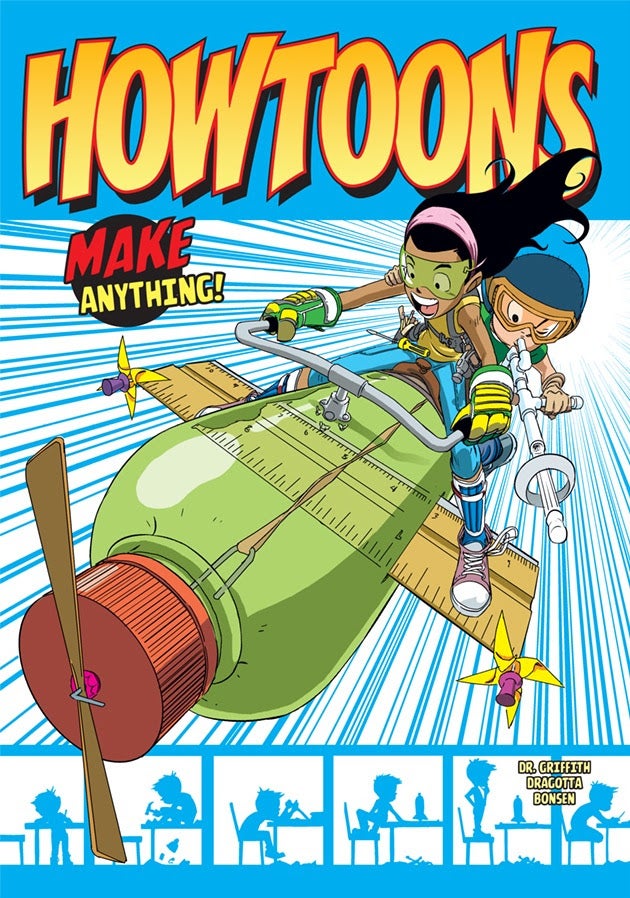 Is that part of how Howtoons came about?

Well, Howtoons we started ten years ago, so long before the kids. That was just a project that started when I was living in Boston. My friend, including Saul, were grad students at MIT. I met them through answering an ad. They wanted to do a comic book that was a how-to book, essentially. That turned into Howtoons, and we just kept doing it because we believed in the project. We saw people using it. Schools were using it, schools would ask us to come in and give talks, and libraries liked the book. We got a publishing deal with Harper Collins, and then we were in Make Magazine, which is a do-it-yourself magazine for different makers.

Then, I mentioned it in an interview, and Eric [Stephenson] was like, "What's going on with Howtoons?" And I was like, "Nothing, it's just sitting there and we have a bunch of content." And he was like, "Let's publish it." And then we've also got a new monthly coming out next month. I'm really proud of Howtoons. But yeah, I have this super-violent sci-fi book, and then I do Howtoons too, a children's educational book.

Could you ever see East of West being adapted for film or television?

Sure, yeah. I'm really interested in the comic, and I guess if we were ever going to do a show, and that's probably a pipe dream, that we would be involved creatively in the show. I think that's kind of a line in the sand for me and Jonathan. We wouldn't just want a show that says "based on the comic by...," we'd want to have the show be created by us and to play some role creatively in it.

Right now, I'm a comic book artist and I like telling stories on paper, and that's where my focus is. That stuff can get so distracting, and I like comics. But we'll see, I don't know.

Any last thing you wanted to tease to readers about what's coming in East of West?

War is coming! The next arc is going to be all about, basically, the Endless Nation has waged war, and they're starting with Texas. You'll see in the next issue they're pretty much just blowing up everything on the way to Texas.

Nick Dragotta Talks East Of West, Howtoons, And All The Comics