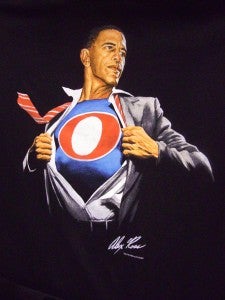 Not long ago, Comicbook.com brought you the news that an African-American Superman would be appearing in Action Comics #9, coming in May from DC Comics. The character, an alternate-earth version of Superman appearing in the backup feature by sholly Fitch and Cully Hamner, has now been solicited as "President Superman," and the cover image released in DC's May solicitations is strikingly similar to the one at left, painted by Alex Ross back in 2008 for the Presidential campaign of Barack Obama. Alex Ross, the superstar comics painter behind Marvels and Kingdom Come, is well-documented as being politically left-of-center, having drawn painted at least two popular images extremely critical of former President George W. Bush and his policies. the idea of a Democratic Presidential candidate who also self-identified as a comic book made a natural target for a piece by Ross. The image, which was available as an officially-licensed t-shirt and has found its way onto the backs (or at least into the hands) of the likes of Samuel L. Jackson and President Obama himself. It was also used as the cover of a special edition of Wizard Magazine when Obama was elected, featuring the caption "A comic fan storms the White House." 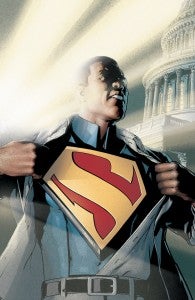 While Ross's original image was certainly dealing in Superman iconography, it's hard to miss the fact that DC chose to use essentially the same image for their solicitations. Essentially, Ross played off DC's iconography and in exchange DC is playing off his well-known Obama image to release the story of a black President who's not-Obama-in-name-only and instead throws on the tights and cape during his off-hours. DC is clearly interested in promoting the African-American "President Superman" story--in spite of being a backup feature, it's the solicited cover for the issue--in a way that subplots, one-offs and alternate earths rarely enjoy. While it's certainly helpful that many of DC's books are dabbling in the Multiverse for the first time since the New 52 relaunch, it also seems likely that they're interested in generating the kind of comics-moving buzz that Marvel enjoyed last year when they launched a new, nonwhite Spider-Man in the Ultimate universe. Or else in picking up on some of that cool comics controversy cash that Marvel and Image have pocketed in the past by featuring President Obama in titles like Amazing Spider-Man and Savage Dragon. As has been stated various times before, including in the original piece here at Comicbook.com, an African-American President Superman also appeared in Final Crisis, the 2008 event miniseries by current Action Comics writer Grant Morrison.

Popular Xbox One Horror Game Now Only $2 for Limited Time

Batman Beyond: Catwoman Could Have Returned in DC's Cancelled Michael Keaton Movie

Marvel's Wonder Man Series Premiere Window May Have Been Revealed