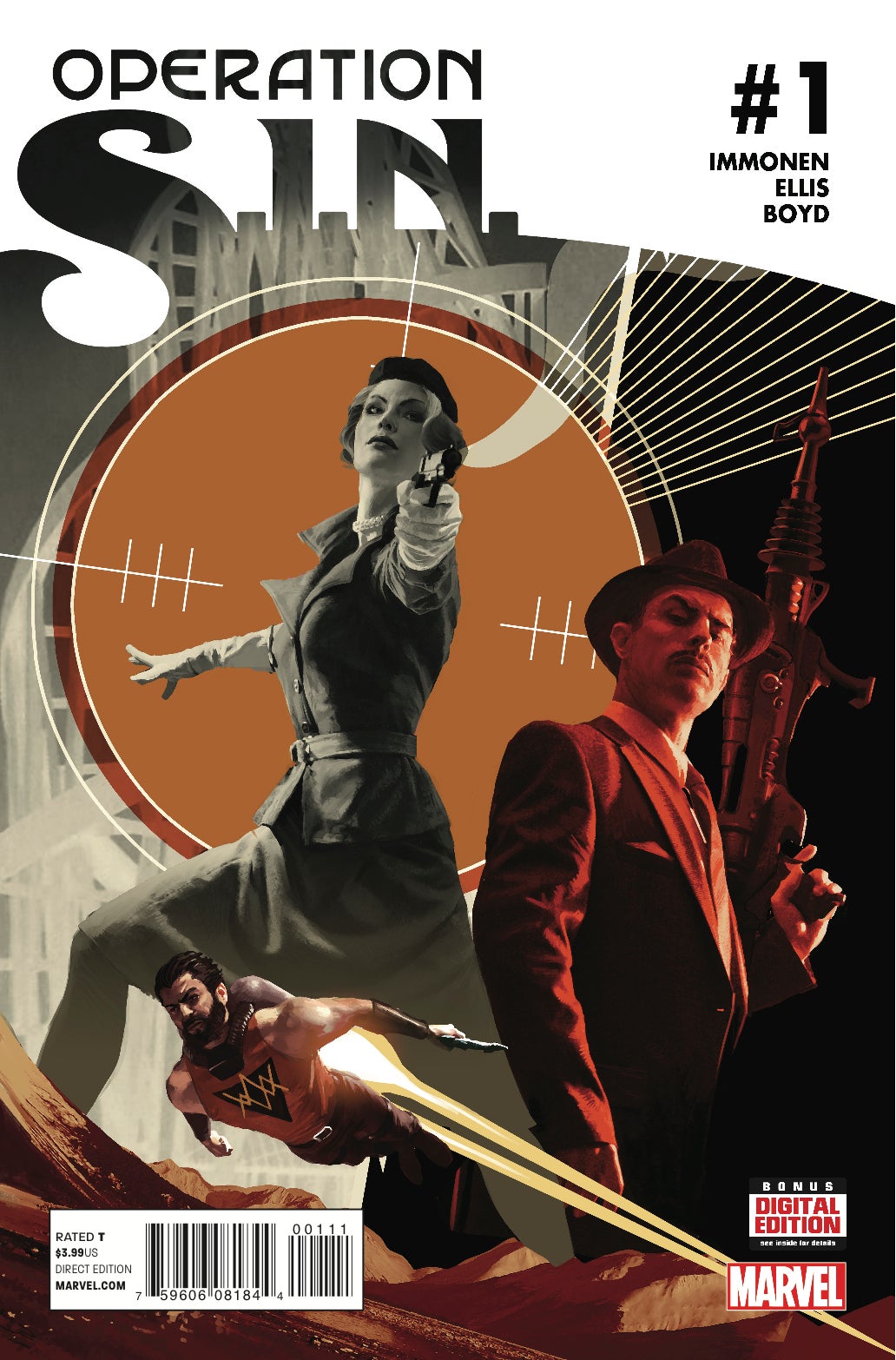 Operation S.I.N. #1 ties into events in both the live action and comic arms of the Marvel brand. Not only does it feature Peggy Carter and Howard Stark (with Agent Carter premiering in less than one week), but it completes its core cast with Woodrow McCord, a new character introduced in Original Sin. It's the sort of premise that sounds forced when summarized to an elevator, but easily justifies its existence after reading the first issue. Operation S.I.N. takes these lesser known characters from the history of the Marvel Universe and embroils them in a cloak and dagger plot that is equal parts Cold War spy thriller and extraterrestrial adventure. Kathryn Immonen and Rich Ellis take the best elements from Agent Carter and Original Sin in order to make a comic that is most certainly its own story.

Ellis quickly establishes the mini-series as a period piece in the first few issues. Even in a contained action sequence, the outfits and setting places Operation S.I.N. firmly in the early 1950s. Carter is wearing a nightgown that could easily be pictured on Betty Draper of Mad Men and the orderly, square layout of her house is clearly drawn from those built under the G.I. Bill. Name dropping the Rosenbergs places the date at either 1950 or 1951. It is the beginning of Cold War paranoia and a period of unique styles and design in America, two elements which Immonen and Ellis take full advantage of.

Creating the look and feel of the early 1950s comes from Ellis' clear dedication to research. Everything from the suits to office interiors to modes of transport is drawn from history. He reveals himself to be a storyteller concerned with authenticity in a tale where only the genre elements are without a clear reference point. Not only is his sense of design excellent, but his compositions are consistently clear. Ellis reminds me of Kano or Steve Lieber in his style, constructing an exaggerated reality that builds elements of cartooning and humor into its foundation. Although his pencil work is not quite as refined as either of those artists, he never leaves any question as to what is happening or who a character is.

Immonen enhances the period of this superhero and superspy mash up by playing to the different sorts of roles that Carter, Stark, and Woodrow McCord would all fall into. Stark and McCord play two sides of the same coin regarding American masculinity. Stark is the wealthy, self-assured master of industry, comfortable in his privilege (Roger Sterling as a super genius). McCord is the ultimate man's man, a believer in the rewards of war and righteousness of might (Teddy Roosevelt with a ray gun). Both are still noble men, but they are not beyond a healthy sampling of foibles.

Carter is the star of the series from page one though. Whether she is cracking skulls or marching through offices, she acts with assuredness tempered by weariness from the war. There is a depth to Peggy that moves her beyond the cliché of a tough woman working in a man's world. Instead, she is a fully developed character whose place in 1950s America does not define her, but only brings forth her best qualities.

The pacing of Operation S.I.N. #1 drags a little bit with a great deal of introductions and exposition pushing the first real conflict of the issue to the very last page. However, that is easily forgivable given Ellis' well researched work and Immonen's refined character moments. Together they make it clear that this is a story they are invested in telling and one we should be interested in reading.

Plus, it appears that Woodrow McCord punches a bear in the next issue, which clearly shows that things are only beginning to get good.