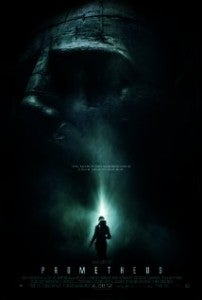 As much as I've loved Ridley Scott's films throughout the years (take your pick—American Gangster, Black Hawk Down, Hannibal, Gladiator, and more), I'm really excited to see him jump back into Sci-Fi.  And judging by the trailers for his latest film, "Prometheus," I'd say he's 'all-in' on the genre.  We showed you the U.S. trailer here, and now there is a new International trailer. Here it is:

Now THAT is a great trailer.  It tells you the story without revealing too much. Hooks you into the plot, then captures your imagination through the LACK of visual activity.  Some have rumored that this film is a prequel to the "Aliens" franchise.  I don't know if that's true or not, but it sure as heck looks as scary.  And the idea of Scott helming an Aliens-type pic with much better technology excites the heck out of me. "Prometheus" stars Noomi Rapace, Michael Fassbender, Charlize Theron, Guy Pearce and a whole host of other folks.  It opens in theaters June 8th.