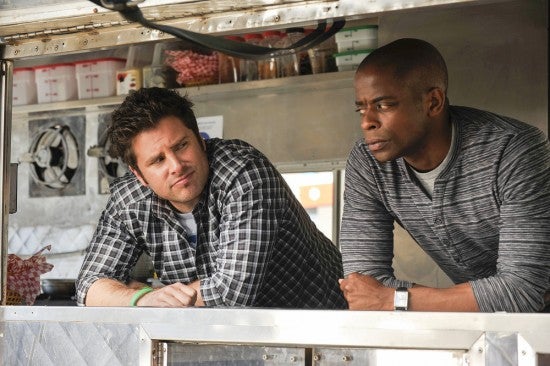 When the proprietor of their favorite food truck is murdered, Shawn and Gus take it about as poorly as you might expect from two fans of delicious flavor, in a new scene from next week's Psych. In the episode, titled "Shawn and Gus Truck Things Up," the pair are called to a scene where a number of food trucks are gathered, providing them a ready list of competitors to be suspects in a twist on the typical convention of having the murder take place at work or a professional gathering where all of the players are present. From the preview photos, you can see that the duo take over one of the trucks in the course of the investigation--a perfect setting to give the pair a lot of alone time to discuss the revelations of last episode as they gear up for the series' endgame ahead of its March 26 finale. You can check out the preview scene, along with an official description of the episode, below. After the owner of a favorite food truck is murdered, Shawn and Gus vow to catch the person who deprived them of sustenance. They decide to go undercover with their own truck, and suddenly are thrust into the cut-throat competition and secrets behind the scenes of the industry.