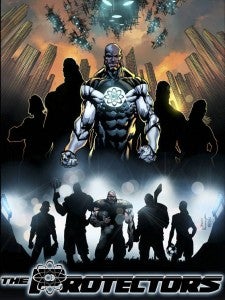 Israel Idonije, a defensive lineman for the Chicago Bears, is not exactly your stereotypical comic book guy. I mean, you don't see NFL players hanging around the comic shop in The Big Bang Theory, do you? He is, however, a long-term fan and now, with the help of comics industry veterans Ron Marz and Bart Sears, the creator of his own comic book series, The Protectors. Set to be published in 2013 from Idonije's Athleta Comics, the series follows the exploits of a group of professional athletes who learn that their skills really are far beyond those of their fellow man--and that there's a reason for that. What follows is a tale of power, responsibility and living up to your destiny when you've got as much to lose as just about anybody. Idonije, Marz and Sears joined us to talk about The Protectors. We've cobbled together this introduction from the first half of the conversation and, as the release of the story draws closer, we'll have a follow-up with the team that gets somewhat more into the process of approaching the story. ComicBook.com: What I wanted to ask to get started is this - Israel, are you a comic book guy? Israel Idonije: Yeah. I grew up reading some comic books that were given to me through one of my father's friends. My father had a program called Street Love where you could donate goods, food, to the people in the community that were in need and one day one of the things that came in were a bunch of comic books--Green Hornet comics and Spider-Man and Iron Man. So that's kind of where it started. As a young kid, I started reading these great stories and escaping into these adventures and that was kind of where it all started for me. Then sports and everything happened and I went off to college and got away from it for a while but in 2007, I was in training camp for the Bears. Literally, training camp is: you wake up, you eat breakfast, you go to meetings, you practice, you eat, you practice, you go to meetings, and you do that for three weeks in a dorm room that's about eight feet by eight feet. That's training camp life, so I decided I wanted to make good use of my time, I wanted to create a story and I decided I was going to make that story based on the origin of athletes--where they get their gifts from and to tell that origin story--tell the story of why this happens. Like everybody else, I watched ProStars when I was a kid and I look at some of the other attempts to bring the world of sport and comics together and I felt that we could do a better job at it, and The Protectors was born from there. I didn't know where it was going to go but it's been really exciting as I've seen the project develop. The images in your head come to life and the things that have happened are just so exciting. Bart sent me some pictures today and--man! You get shivers, you get goosebumps looking through them and you start to identify with the characters. It's a great feeling, it's a great project, and I'm having a blast being a part of this great team.

ComicBook.com: Do any of the three of you have any particular affection for NFL SuperPro, or anything like that? I feel like you're right, in that it's been pretty abortive, any attempts to make something happen in this genre. Ron Marz: Nobody has any affection for NFL SuperPro. [Laughter all around.] ComicBook.com: How long have the rest of you been engaged with this? I mean, Israel has been in it since 2007. Marz: For Bart and I, just since--well, now I guess you would say last year. Since 2012, is when we got pulled into it. On Izzy's end, it's been percolating for a long time and he's had other creators along the way helping the project and then Bart and I were thrown into it in the summer of last year. I remember when we first started talking, you were marooned at training camp, working around your practice schedule. So we've been involved since then, and I think it's fair to say it's kind of been building up momentum ever since. Now we're knee-deep in it. I would say knee-deep for Izzy. That'd be maybe waist-deep for me and Bart. 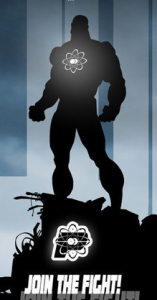