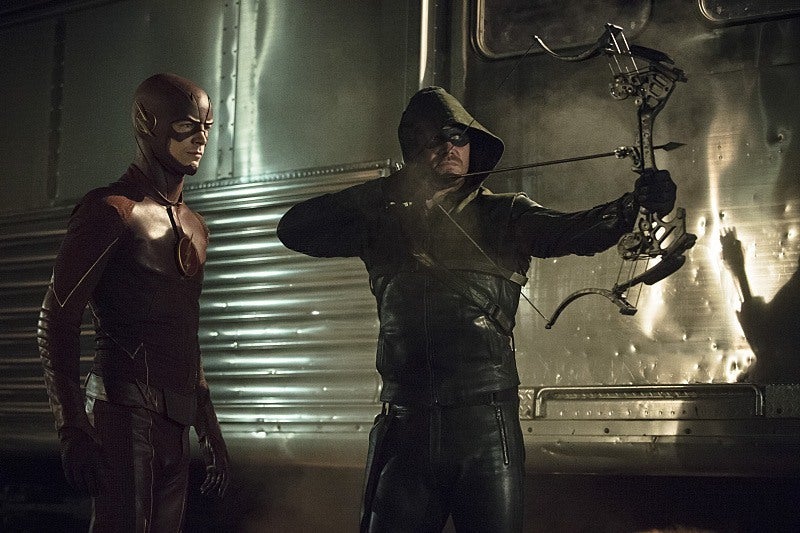 Tonight's episode of Arrow, the second in a two-part crossover event with The Flash, maintains everything that was great in "Flash vs Arrow" while also removing the pacing and structural problems. Following up on the Arrow's original reason for visiting Central City, the hunt for Digger Harkness (better known as Captain Boomerang) continues. This time the action is in Starling City with Barry, Caitlin, and Cisco visiting to help.

The highlights in both these episodes are the same. Both series sport great supporting casts and seeing them interact is an absolute delight. The removal of Joe West and Dr. Wells creates room for Roy Harper and Lyla Michaels. Cisco and Diggle continue to provide excellent banter and a humorous backdrop without ever seeming to try too hard. They make a natural odd couple pairing that begs for some future crossover to focus on them working together.

Barry and Oliver's sense of camaraderie is just as key to this episode, if not more so. The two interact in a natural and open fashion that feels real, most likely because it is with Amell and Gustin becoming friends off screen. Their rivalry is fun to watch because you are smiling with these characters and even when they challenge each other, it comes from a place of concern and love.

The hanging plot threads and lack of a cohesive story that weighed down "Flash vs Arrow" are gone here in a much more tightly scripted episode. The internal plotlines introduced or continued in Arrow all work naturally both within the series as a whole and the episode as a unique unit. Diggle's relationship with Lyla is a focal point and is introduced and concluded in a fashion that even watchers unfamiliar with Arrow will be able to appreciate. The episode also manages to remain focused on a single plotline rather than switching from one antagonist to another.

Harkness, in spite of the silliness surrounding his alter ego, makes for an excellent antagonist. His early action sequences facing off against ARGUS guards, Arrow, and Arsenal are very well shot and perfectly paced. Director Jesse Warn makes Harkness feel like a legitimate threat focusing on the swirling boomerangs as they drop bodies in quick succession. Harkness is a menace by himself, but also manages to pose as a threat to the super-powered Flash. The finale of tonight's episode manages to take advantage of both heroes abilities and stems naturally from the rest of the episode. As crazy as it may sound, Captain Boomerang is one of my favorite villains on either series so far.

As great as the villain was here, the show still belongs to the heroes. Although "Flash vs Arrow" explored the differences between the two men and how they affected one another, it never came to a meaningful conclusion. Joe West took issue with Arrow's use of torture, but the subject was dropped as quickly as it was raised. In "The Brave and The Bold", writers Greg Berlanti and Andrew Kreisberg address these issues head-on and provide meaning and depth to the friendship shared by the two heroes.

A series of flashbacks reveal that Oliver once failed to stop a bombing in part because he refused to torture a suspect. It doesn't validate the use of torture, but it humanizes Oliver and helps make his darker methods seem more empathetic. The most interesting part of the episode is not why Oliver has elected to use such brutal methods in the past, but his choice to change and grow. Rather than ignore the grim shadow of Arrow's first season, Berlanti and Kreisberg use Arrow's friendship with the Flash to help him mature as a hero.

The Flash (both as a character and series) has come to reflect a much more positive and optimistic tone than Arrow (again as a character and series). He may be perceived as occasionally naïve, but also upholds a higher standard for inspiring hope and helping others. That position is what encourages Arrow to become better as well. In the same regard, Arrow's sense of competency and high expectations drive Flash to be a better hero as well. They challenge each other not just by revealing one another's weaknesses, but helping each other improve upon them. It's a friendship that truly feels deserving of this episode's iconic title.

"The Brave and The Bold" is one of the best episodes to date for either The Flash or Arrow. It blends these two series seamlessly into an action packed, heartfelt, and very enjoyable forty minutes of television. Not only is it a delight to watch, but it manages to also develop both of these series and reveal the potential in both ongoing stories. It's clear that no network is doing better work in the superhero genre than CW.

Review: Arrow: "The Brave and The Bold"